Many of the advanced communications systems being developed today utilize quantum mechanics to process, store, and transmit information. harnessing the principle of entanglement, where two particles become so intimately connected that they act as a single system, no matter how great the distance between the two particles might be.

The problem for optical quantum systems which rely on photons is that the components that process and store information require visible-light photons, but the fiber optic cables that transmit the information need near-infrared light—whose wavelength is nearly 10 times greater.

Scientists at the National Institute for Standards and Technology (NIST) appear to have found an ingenious solution to this problem using a well known physical phenomenon known as a “whispering gallery” as inspiration.

In an acoustical environment where the walls form a perfectly curved surface on every side, sound waves can travel largely unimpeded, so that a person standing at one position along the wall can hear the faintest sound coming from any other part of the wall.

Known as whispering galleries, these structures are responsible for some of the worlds most well known architectural sites. 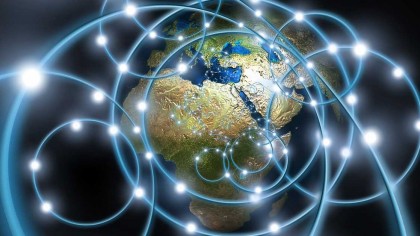 They achieved this by creating specially designed optical “whispering galleries” where a pump laser would enter into a ring-shaped resonator and as it spins through the ring, a pair of entangled photons emerge: a visible-light photon and a near-infrared photon.

“We wanted to link together visible-light photons, which are good for storing information in atomic systems, and telecommunication photons, which are in the near-infrared and good at traveling through optical fibers with low signal loss," said Srinivasan. This gives those hoping to engineer optical quantum communication systems the ideal entangled particles to work with. More importantly, they are able to do it in a way that is scalable.

“We figured out how to engineer these whispering gallery resonators to produce large numbers of the pairs we wanted, with very little background noise and other extraneous light," Lu said.

The most promising aspect of this technique is the potential for what’s known as entanglement swapping. This is where two pairs of entangled particles are linked to two units of quantum memory, the entanglement of the pairs is passed to the memories, linking them together over vast distances, something that was unthinkable before.

"Our contribution was to figure out how to make a quantum light source with the right properties that could enable such long-distance entanglement," said Srinivasan.

Good News for AstraZeneca: Vaccine Shows 79% Efficacy in US Trials