The novel molecule can function both as a photocatalyst to produce fuel and in solar cells to produce electricity, replacing the expensive and rare metals in use today.

Scientists are looking at some of the most unlikely sources for energy production, partly motivated by academic and research objectives, and partly to create a new framework of energy production and extraction.

Though some raise eyebrows due to perceived feasibility challenges like China's artificial sun ambitions, or the device that was developed to convert exhaust into renewable energy, the sheer number of examples of creative energy generation are truly inspiring.

Now, researchers have produced an iron molecule with photocatalytic promise, and it could provide large benefits in terms of both (1) electricity generation in solar cells and (2) fuel production. As iron is a more plentiful and cheaper to supply source of metal, this will also have an impact in the industry.

A growing body of research in the last decade has shown the strong potential that other metals can have in photocatalysis, with scientists focusing on iridium and ruthenium more and more "due to the access they provide to new synthetic spaces through new reaction mechanisms". The challenge, however, lies in how rare they both are.

The team produced its results by altering their approach to the molecular coordination, which allowed them to create an iron molecule that resulted in iron-based light that was observable at room temperature, a first in science, although their work builds on previous studies in the same area.

"The good result depends on the fact that we have optimized the molecular structure around the iron atom", explains colleague Petter Persson of Lund University, who was also part of the study.

Next Steps in the Research

A revised, or expanded, roadmap of solar energy production could be in the works, according to the researchers. This could also mean developments in another number of areas which rely on iron molecules. 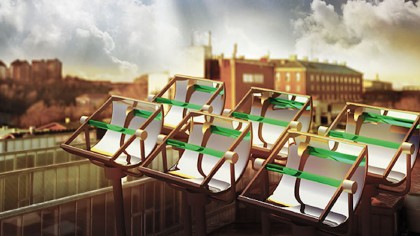 "Our results now show that by using advanced molecule design, it is possible to replace the rare metals with iron, which is common in the Earth's crust and therefore cheap", says Chemistry Professor Kenneth Wärnmark of Lund University in Sweden.

Beyond the promising potential of the iron molecule, the fact that the breakthrough came now is what surprised the researchers the most. Wärnmark summed it up best when he said, "We believed it would take at least ten years."

Still one wonders, however if, given the rate at which we are consuming materials, that one day a similar team will be announcing a cheaper alternative to the very rare iron.

This research serves as good news in the sense that, although we are aware of the powerful and undeniable benefits of solar energy, we must also ensure that the materials behind the technology also support a realistic and sustainable vision. With no end in sight to the momentum behind solar energy, this breakthrough is an important step.

Details about the study appear in a paper, titled "Luminescence and reactivity of a charge-transfer excited iron complex with nanosecond lifetime", which was published November 29th in the Science journal.