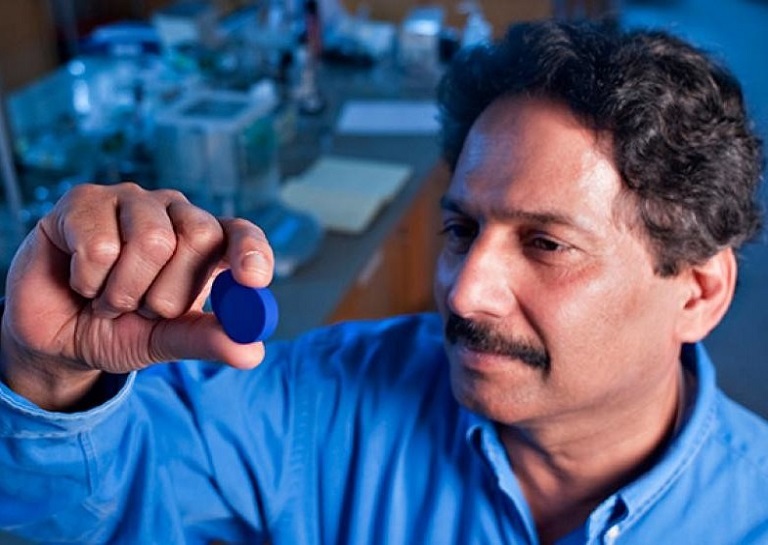 A vivid new pigment of blue accidentally discovered by scientists from Oregon State University in 2009 could help buildings keep cooler.

OSU chemist Mas Subramanian and his team responsible for the mishap were experimenting with new materials to be used for electronic applications when they made a ‘happy’ discovery. After mixing a concoction of manganese oxide and other chemicals, followed by heating them to nearly 2,000 degrees Fahrenheit, the sample came out an incredible vivid blue. The compound was originally intended to be studied for its electrical properties, however, something incredibly useful was discovered.

“It was serendipity, actually; a happy, accidental discovery,”

Further experimentation revealed properties that could prove to be extremely useful across a variety of applications. The color can be easily manufactured into a paint where it can keep a building cool by reflecting infrared light. Upon further analysis, the new pigment was discovered to contain a unique crystal structure that enables the manganese ions to only reflect blue light, absorbing red and green wavelengths. It was discovered that the color can reflect upwards of 40 percent of all infrared light, much more than any other blue pigment.

The compound is remarkably durable, and still incredibly stable- so much so that the color will not fade even in oil and water. Furthermore, and quite possibly more importantly, all the ingredients are non-toxic.

“Ever since the early Egyptians developed some of the first blue pigments, the pigment industry has been struggling to address problems with safety, toxicity and durability,”

said Subramanian in a statement released by OSU. Other blues including cobalt and Prussian blue are quite hazardous- not practical for commercial use. However, the pigment is completely safe.

“The more we discover about the pigment, the more interesting it gets... We already knew it had advantages of being more durable, safe and fairly easy to produce. Now it also appears to be a new candidate for energy efficiency.”

Just last year in 2015, OSU reached a licensing agreement with The Shepherd Color Company to bring the color to market. The color is now known as “YInMn” blue, named after its composition of Yttrium, Indium, and Manganese. It will soon be integrated into a large variety of different coatings and plastics.

“This new blue pigment is a sign that there are new pigments to be discovered in the inorganic pigments family,”

Artists are already using the pigment for its durable properties to restore works. The color is relatively cheap to produce and is proving its worth already.  Subramanian is conducting further experimentation to discover other pigments and other applications of the pigment.