The contact lenses can be safely worn for two weeks while dispensing medication into someone's eye.

Harvard Medical School researchers have created unique contact lenses that can dispense medication directly into someone's eye over the course of days or weeks. This could be a great help to more than 30 million people in the United States alone who wear contact lenses.

Not only did the team create the invention, they also won the MIT Sloan Healthcare Innovation Prize competition for their work. The researchers took home the $25,000 prize for the contacts they dubbed as Theraoptix. 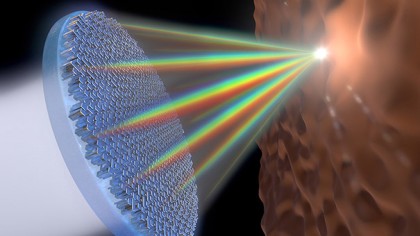 Harvard Researchers Have Developed a Metalens That Could Revolutionize Optics

The contact lenses are crafted from materials approved by the Food and Drug Administration. They slowly release medication that is stored in the contact lenses' materials. There's a small, drug-filled polymer film, that forms a strip around the lens itself but it never interferes with the wearer's vision.

According to the researchers, the lenses can be worn all day for treatment, and at maximum, they can safely be worn for two weeks. These lenses could potentially help treat things like glaucoma or they could help an eye heal after an optics surgery. Not only do the lenses treat the outer surface of the eye's front, the researchers noted, but the drugs are effectively delivered to the back of the eye as well. This would address issues like macular degeneration, diabetic retinopathy, retinal vein occlusion, and other typically frustrating and hard-to-treat issues. The team said this innovation could solve one of the biggest problems in treating eye issues -- liquid dripping out of the eye.

The eye drop/contact lens hybrids were not the only big innovations debuted at the competition. Strand Therapeutics won second place and earned $2,000 for the development of mRNA-based anti-cancer drugs. There was even a $500 prize for the audience's choice that was given to Healthcare Hospitality Systems, a group that developed directional sound systems for hospital rooms.

Dozens of area teams enter to compete, but only eight teams are ever selected to participate and pitch their product before the judges. Several weeks before the competition, the teams get mentors from the program to make their pitch and product as close to perfect as can be. Teams are picked due to the novelty of the invention, whether it's technically feasible, regulatory hurdles, and whether or not the team has ever gotten any customers from its product.

"SHIP provides student-run startups the opportunity to gain important exposure in order to recruit team members and advisers, identify new partnerships, and find resources to help them move their companies forward," he said. "These startups are focused on tackling some of today’s most challenging problems in healthcare, and MIT is well-positioned as a global technology and business thought leader and is located in one of — if not the — largest healthcare innovation ecosystems in the world."

In short, Theraoptix's win at this year's contest almost guarantees that these drug-depositing contact lenses could be an option much sooner than one would think.