The Merriam Webster Dictionary has built a new tool that lets your time travel through the evolution of the English language.

By  Jessica Miley
Oct 29, 2018
Discover when words were first used in print with the Merriam Webster Time Travel tool. Merriam-Webster

Every year new words are added to our official dictionaries, a sign that the English language is evolving and adapting to modern times. In 2018 the Oxford English Dictionary added Antifa, binge-watch, Beerfest, jumbotron, modder, and nothingburger to their tomb of words.

New words are a reflection of current cultural conditions and popular culture. Understanding when words were first used in print gives us an insight into cultural norms, language and the evolution of phrases. 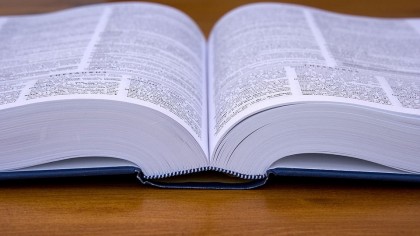 For instance, let's see what happened in the year 1999 when everyone fretted over Y2K coveted Jennifer Aniston's hair and was getting addicted to the Nokia snake game. In that glorious year according to Merriam Webster the words blog, texting and carbon footprint appeared for the first time.

It’s fun to see the evolution of now common tech-related phrases from techy in 1977, flash drive in 1992 and hypermiling in 1996. While it’s easy to think about these dates as the ‘birthday year’ for these words, Merriam Webster makes it clear that the ‘date may not represent the very oldest sense of the word. Many obsolete, archaic, and uncommon senses have been excluded from this dictionary, and such senses have not been taken into consideration in determining the date.’

Earliest written or printed use available

They also go on to explain that “the date most often does not mark the very first time that the word was used in English. Many words were in spoken use for decades or even longer before they passed into the written language. The date is for the earliest written or printed use that the editors have been able to discover.”

And like lots of things in life, the date associated with that word may change if new evidence comes to light about an earlier use. It isn’t just single words that are recorded on the site, but phrases also get a mention.

Unbelievably ‘elephant in the room’ is first recorded as being used in 1985. It seems the mid-80’s was a big year for words with more than fifty being seen for the first time that year. Other words and phrases making their debut in 1985 are as diverse as 'Vietnamese pot-bellied pig’ to graphene to sexual predator. Check out your birth year on the Merriam Webster Time Traveller site and comment on your favorite words.

A New Kind of TV Can Mimic Delicious Flavors. When You Lick It?