A team of scientists has predicted with 76% certainty that Cheddar Man possessed wildly different features than that had previously been predicted.

The results of a recent DNA analysis are turning ideas about human origins upside down. 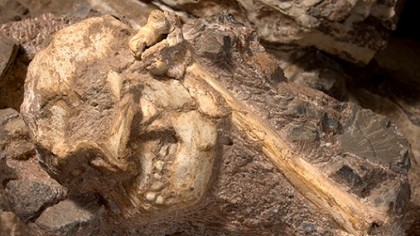 According to the results, the most distant Britons had dark curly hair, blue eyes, and black skin.

The round of genetic tests carried out by the University College London together with the highly esteemed Natural History Museum, were performed on ‘Cheddar Man’, who scientists estimate died roughly 10,000 years ago, after the end of the Ice Age. Representing the oldest and most complete human skeleton ever recovered in the country, the team was, of course, thrilled about the opportunity to study the specimen.

A Story More than 100 Years in the Making

The interesting name given to the ancient human can be explained by the fact that his remains were first discovered in Cheddar Gorge, a limestone gorge located in Somerset back in 1903. Since the time that the skeleton was unearthed, dozens of theories had been put forth about his appearance, with no actual way to confirm the information.

It’s a shame that the original scientists who found Cheddar Man did not live to see the remarkable potential of genetic testing. Now, 115 years after the day he was found, Cheddar Man makes the important leap from myth to reality thanks to a combination of facial reconstruction techniques and innovative DNA techniques—the DNA obtained from drilling a 2mm hole in Cheddar Man’s skull was sequenced to achieve the remarkable results.

To achieve realistic facial reconstruction objectives, identical twin brothers (adding to the genetic irony) Alfons and Adrie Kennis first scanned the skull to make a working 3D model. The pair work together on Neanderthal reconstruction projects for other museums, and report that the project took about 3 months to carry off, Alfons Kennis shared, adding that the project was a challenge for them, given the completely different facial features: “It's really nice to make a more graceful man, not a heavy-browed Neanderthal. So we were very excited that it was a guy from after the Ice Age. We were very interested in what kind of human he was.”

Establishing the Notion of a More Dynamic Link to the Past

Discoveries like this bear witness to the fact that modern notions of racial and ethnic identity are just that, modern, and that the genetic landscape that shapes our appearance in these times is infinitely more complex than we could have ever imagined. This find is of particular interest, as the features of the ancient specimen bear little resemblance to modern-day Britons, complicating the ethnographic picture even further.

Dr. Tom Booth, who also worked on the project, discusses how Cheddar Man complicates the timeline scientists have constructed:

“It may be that we may have to rethink some of our notions of what it is to be British, what we expect a Briton to look like at this time.”

“Until recently it was always assumed that humans quickly adapted to have paler skin after entering Europe about 45,000 years ago. Pale skin is better at absorbing UV light and helps humans avoid vitamin D deficiency in climates with less sunlight.”

Proof of this, interestingly, can be found in earlier reconstructions of Cheddar Man that reveal an emphasis on perhaps forcing a modern Eurocentric narrative.

Dr. Rick Schulting, an archaeology professor at Oxford University, spoke about the development, arguing that the DNA evidence establishes a very compelling link between the past and present: “It may be that we may have to rethink some of our notions of what it is to be British, what we expect a Briton to look like at this time.”