Steven Holl Architects have won an international commission competition to build the new Doctors Without Borders Headquarters in Geneva.

Steven Holl Architects will design the new Doctors Without Borders headquarters in Geneva. The New York-based architect firm beat a bunch of the world's top firms to score the commission.

The proposed “Colours of Humanity” building is designed for maximum energy efficiency. The structure features walls of colorfully tinted glass that also include photovoltaic panels. The panels are estimated to be able to provide most of the energy for the building.

The photovoltaic cladding will have several different expressions of permeability. Some will be completely transparent while others will act as shade giving devices or obscure private parts of the buildings. In total it is estimated that about 40% of the photovoltaic panels will be transparent, acting like regular glass. Additional panels will be also placed on the building's roof to maximize the capacity of the building to generate its own energy needs.

Building to provide 72% of its own energy needs

In addition to the PV panels, the building also integrates a unique heating and cooling system that uses water from nearby by Lake Geneva. 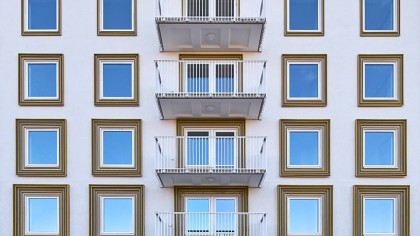 The system called Genilac means the building should be able to provide for 72 percent of its own electricity requirements. While the green credentials of the building were very important for the judging panel, the building also needed to provide a layout that would meet the charities working style and ethos.

Mathieu Soupart, the logistics director for the center, described the design of the building saying: "Steven Holl Architects' project is the opportunity for MSF to integrate its core values like independence, impartiality, neutrality, altruism, and dynamism in a challenging new architecture and project itself in the future."

A large green roof is an integral part of the design as are walkways that connect different functioning sections of the plan. Among these walkways are seating areas, that are designed to be used by the building's occupants to encourage "open dialogue and interaction". More than 250 Doctors without Borders staff will work from the building once it's completed.

Steven Holl Architects will work with Rüssli Architekten to complete the ambitious project. Building is expected to start in 2019.

Doctors Without Borders or Médecins Sans Frontières (MSF) is a charity organization established by a group of doctors, in 1971 to send independent help to humanitarian crisis areas. The concept of emergency humanitarian care was a new concept at the time.

MSF founder, Bernard Kouchner says: "It’s simple really: go where the patients are. It seems obvious, but at the time it was a revolutionary concept because borders got in the way. It’s no coincidence that we called it ‘Médecins Sans Frontières."

MSF was officially founded on December 22, 1971. It’s guiding belief was that all people have the right to medical care regardless of gender, race or religion and that theses basic needs outweigh the importance and respect for national boundaries. “Doctors Without Borders, MSF, is an inspiring organization. It is an honor to realize architecture for their Geneva home,” said Steven Holl.