A redditor's drone footage captures the impressive scale of the expanded Tesla Fremont factory and showcases the latest Model 3 units.

Tesla fans are seeing more of the factory in Fremont than ever before thanks to this new drone flyover footage. The video even included a look at the impressive (and growing) Tesla Model 3 inventory -- a comfort given everything the company has struggled with in keeping that production schedule.

Redditor darksoldier360 used a DJI Mavic Pro and captured some of the coolest footage yet of the Fremont factory.

The shots make it a little difficult to see exactly how many units of the Model 3s are in the lot. They're also mixed in with Model S and Model X units as well.

Impressed by the size and the scale of the Fremont factory? Thank the Model 3's development and production. It's what spurred a master plan to nearly double the plant last year. The original factory had 5.3 million sqare feet of space for both manufacturing and office purposes. However, the additions tacked on another 4.6 million square feet.

The master plan ultimately wanted to create a space able to churn out 500,000 cars per year -- a feat that finally seemed doable after extensive internal leaks from Tesla employees concerned about production rates. However, as of December 14, the Model 3's production is at about 5,000 units per week, according to Taiwanese auto component maker Hota Industrial. (Hota crafts the gears and axles for Tesla.) And, in addition to getting production back in swing, Tesla is also rolling out the Model 3 preordered units to non-employees.

Most recently, a Tesla Model 3 went for sale on Craigslist for $120,000. This is despite company statements directed at employees about to purchase one of their own Model 3s.

"Because employees are receiving special priority, all Model 3 cars prioritized to employees must be registered to you or your family member and may not be resold for more than the original price," company officials said in an email sent out to employees. "Reservation holders will agree to these terms when their order is placed." 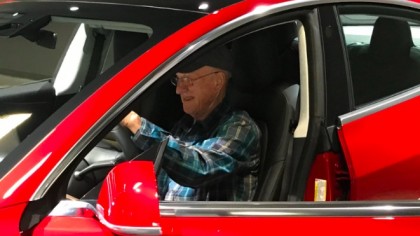 And, technically, we've seen worse. The first 'used' Tesla Model 3 went on sale for a whopping $150,000 in October. And, again, this listing came from Craigslist, but the post has since been removed. The listing said:

"“First ever Tesla Model 3 for sale. Car is lightly used with just over 2,000 miles. This is a unique opportunity to own one of the most anticipated cars ever. Skip the line of over 400,000 people and buy the car of the future now! Car is fully loaded with the 310 Mile Long Range Battery, Panoramic Glass Roof, Premium Interior, Sound System and Aero Wheels. Car has been great for the past 2,000 miles and a unique circumstance is forcing me to part with the car. Fit and finish are excellent for an early production model. This car meets all of the hype and I plan on owning another in the future."

Electrek confirmed that the Model 3 for sale was in fact a Tesla Monterey employee. Given everything the Model 3 has been through from promotion to production to delivery, it'll certainly be one of the most memorable cars hitting headlines of 2017.