New Electronic Skin Puts Your Heartbeat on Your Hand

A team from Tokyo developed a stretchable electronic skin that can both display data in real time on the skin or send it to a smartphone via the cloud.

Synthetic skins, despite sounding strange and slightly eerie, could provide a whole host of benefits in detecting health issues in the future. That future could be nearer than originally anticipated thanks to researchers from the University of Tokyo. The team developed a thin elastic display that can track heart rate and then show that information on a smartphone or on the skin itself.

Professor Takao Someya led the research team from the University of Tokyo's Graduate School of Engineering who noted that the electronic skin is incredibly unique.

"Our skin display exhibits simple graphics with motion," Someya said. "Because it is made from thin and soft materials, it can be deformed freely."

The tech itself uses semiconductor technology to track vital signs and then display the readings or even an electrocardiogram's waveforms on the screen in real time. Users also have the option to send the information to the cloud where it can be stored on other devices like smartphones or tablets, or sent directly to a medical professional or specialist who might be miles away.

The electronic display sits snugly on the skin, but even with that durability and stretch, not a single pixel failed during the study and development. Those pixels also won't hinder the body and skin's natural movement. As for 'breathability', the electronic skin is incredibly durable and can be worn on the skin continuously for a week before any inflammation occurs, the researchers noted. Each display has a set up of 16 x 24 micro LEDs and stretchable wiring that's mounted onto a rubber sheet.

The skin largely takes into account an electronic system that would be safe and simple for elderly people to use, the researchers noted in a press release. It's for those who struggle with current technologies and often difficult-to-read interfaces of other gadgets. This electronic skin could help out home healthcare systems that need a more continuous and non-invasive way to monitor patients but who might lack the people or resources to constantly do so.

"The current aging society requires user-friendly wearable sensors for monitoring patient vitals in order to reduce the burden on patients and family members providing nursing care," Someya noted. "Our system could serve as one of the long-awaited solutions to fulfill this need, which will ultimately lead to improving the quality of life for many." 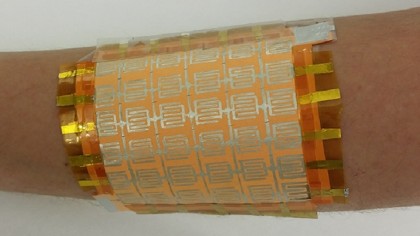 Scientists create an inexpensive prototype for the human skin

The researchers also looked to upscale and mass produce these electronics, and thus, they used tried-and-true production methods like screen printing and solder paste to the development of the electronic skin.

The skin display itself was a partnership between the University of Tokyo's engineers and the Dai Nippon Printing (DNP) group -- an innovative Japanese printing company. At the time of this writing, DNP noted in a press release that they want to bring the integrated skin display to the market within the next three years. Until that time, they'll continue improving the reliability of the data collected as well as the comfort and "stretchability" of the devices by optimizing its structure.