After proving successful with rats, new gene therapy could be a step closer to restoring mobility in humans who've suffered severe spinal injuries.

The new treatment mended the rats' damaged spin nerves by first dissolving the scar tissue. This broke down the barrier between nerves that often form after a spinal column injury, thus giving the nerves a better chance of healing.

Those nerve connections were improved by the treatment also producing an important enzyme called chondroitinase. That enzyme not only breaks down the tissue, but it also allows the nerves to reconnect easily with each other.

The rats showed signs of progress in just two months of the treatments. The rat subjects regained enough of their paw skills back to be able to grab sugar from a platform.

Emily Burnside from the Institute of Psychiatry, Psychology & Neuroscience (IoPPN) further explained what the team noticed during the trials. 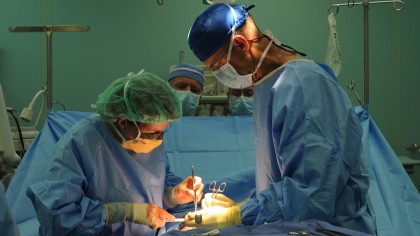 First Ever Robot-Assisted Spinal Surgery Undertaken in US

"Rats and humans use a similar sequence of coordinated movements when reaching and grasping for objects," Burnside said. "We found that when the gene therapy was switched on for two months the rats were able to accurately reach and grasp sugar pellets. We also found a dramatic increase in activity in the spinal cord of the rats, suggesting that new connections had been made in the networks of nerve cells."

Yes, Burnside used the word 'switch'; the researchers developed a way to manipulate the gene therapy, 'switching' it on and off using a common antibiotic.

Elizabeth Bradbury served on the team from the Institute of Psychiatry, Psychology & Neuroscience (IoPPN). In a statement, she noted: "What is exciting about our approach is that we can precisely control how long the therapy is delivered by using a gene 'switch'. This means we can hone in on the optimal amount of time needed for recovery. Gene therapy provides a way of treating large areas of the spinal cord with only one injection, and with the switch we can now turn the gene off when it is no longer needed."

The team needed to overcome a major issue. The rats' immune systems worked hard to identify the foreign gene switch mechanism and remove it as a foreign object. The London-based team reached out to researchers in the Netherlands in order to add a stealth gene that would make the treatment virtually undetectable to the body.

"The use of a stealth gene switch provides an important safeguard and is an encouraging step toward an effective gene therapy for spinal cord injury," said Joost Verhaagen from the Netherlands Institute for Neuroscience. "This is the first time a gene therapy with a stealth on/off switch has been shown to work in animals."

The researchers admit more testing has to be done before the gene therapy is ready for human trials. However, the biggest goal for the team would be to apply the treatment to humans who've suffered severe spinal injuries and can no longer perform basic tasks due to their injuries.

Prior to human testing, the researchers are trying to figure out how to completely switch the gene down, as they discovered trace amounts of the therapy remained active even after the switch was turned off. Once they get this figured out, the team plans on moving the treatment to larger mammals.