The scutoid is a new shape that serves as nature's "space saving" technique during cell development.

In the realm of shapes, there are squares, circles, triangles, rectangles, trapezoids, spheres, pyramids, and more. Get ready to add yet another shape to that list. Researchers have discovered the scutoid -- a geometric shape created in nature that helps pack cells with efficiency.

The shape starts with the development of a cell. During an embryo's formation, tissues will bend into a number of shapes to become an organ down the road. For example, epithelial cells contribute to the outer layer of human skin (the epidermis) and help with selective absorption, protecting the body, transporting cells, and sensing their surroundings. These cells pack in tightly with each other in order to accomodate the curve that happens while they develop.

Researchers have long assumed that these cells pack together in either columns or bottle-like shapes. 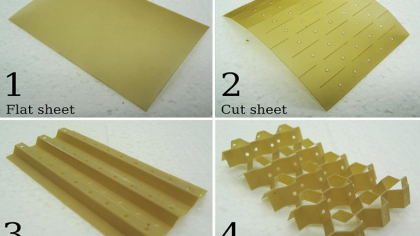 An international team of scientists redefined that assumption, serendipitously discovering a new geometric shape. They discovered that the tissues bend in a previously undescribed shape to minimize the energy used by the body and to maximize the stability of the cells as they form.

The researchers come from a United States-European Union collaboration, more specifically between teams led by Luis Escudero of Seville University in Spain and Javier Buceta of Lehigh University in the United States. The new shape and the process of discovering that shape are both detailed in the journal Nature Communications.

"During the modeling process, the results we saw were weird," said Buceta. "Our model predicted that as the curvature of the tissue increases, columns and bottle-shapes were not the only shapes that cells may developed. To our surprise the additional shape didn't even have a name in math! One does not normally have the opportunity to name a new shape."

Where the name comes from

But why pick the name scutoid? While the discovery occurred during observation of human cells, the name's origin comes from the scutellum -- the rear part of an insect's thorax.

Before they could get too excited over their new find, the researchers had to verify the shape the modeling predicted. They looked at 3D packing of a variety of tissues in different animals. Their experimental data confirmed that epithelial cells adopted a shape similar to the scutoid.

"We have unlocked nature's solution to achieving efficient epithelial bending."

As Buceta explained: "We have unlocked nature's solution to achieving efficient epithelial bending."

While measuring the area of a scutoid might not be on a math test anytime soon, understanding its shape and its purpose could help biologists better comprehend how nature creates certain shapes.

"In addition to this fundamental aspect of morphogenesis," they wrote, "the ability to engineer tissues and organs in the future critically relies on the ability to understand, and then control, the 3D organization of cells."

"For example, if you are looking to grow artificial organs, this discovery could help you build a scaffold to encourage this kind of cell packing, accurately mimicking nature's way to efficiently develop tissues," added Buceta.