New Graphics Processing Unit is 9 Times Stronger Than its Predecessors

Nvidia recently released its most powerful GPU to date. Their Titan line has always been the top of the game, but with the Titan V, they have really outdone themselves.

Nvidia just announced its latest graphics card, and it's a beast. It seems like the company continually touts the "most powerful graphics processor to date" with each new iteration, but the Titan V shows some serious growth over the previous iteration.

The GPU has 21.1 billion transistors and provides 110 teraflops of horsepower. That's nine times what previous Nvidia processors have put out. (Just for some perspective, the Xbox One X puts out only six teraflops, and that level of processing still made headlines for gaming graphics.) It also has 5,120 CUDA cores, 640 Tensor cores, a 1,455MHz boost clock, and a 1,200MHz base clock. This is all coupled with an impressive 12GB of HBM2 memory which can run at 1.7Gbps.

Nvidia CEO and founder Jensen Huang made the announcement during the Neural Information Processing Systems conference in Long Beach, California.

"Our vision for Volta was to push the outer limits of high-performance computing and AI. We broke new ground with its new processor architecture, instructions, numerical formats, memory architecture and processor links," said Huang in a company statement. "With TITAN V, we are putting Volta into the hands of researchers and scientists all over the world. I can’t wait to see their breakthrough discoveries."

According to the company, "TITAN V’s Volta architecture features a major redesign of the streaming multiprocessor that is at the center of the GPU. It doubles the energy efficiency of the previous generation Pascal™ design, enabling dramatic boosts in performance in the same power envelope."

The company hasn't said when the Volta will head to more gaming-focused GPUs. Nvidia's Pascal was introduced in conjunction with the GTX 1080 a little over a year and a half ago. While the GTX 1080 remains one of the most impressive gaming GPUs on the market, it was quickly topped in performance by the GTX 1080 Ti. 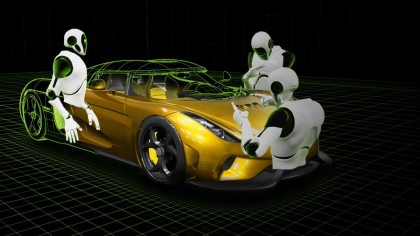 The unit sells for $2,999 each, which is considerably more expensive than other GPUs on the market. They're also only restricted to two units per customer. The price tag might be a bummer for gamers looking to boost performance, but even the company acknowledges that the GPU is best optimized for doctors, researchers, and the medical field.

Nvidia's Titan V could also mean a massive potential improvement in potential processing power for the advancement of AI performance. Google's AI AlphaGo Zero used nearly $25 million worth of computing hardware to become the best Go player in the world earlier this year. Faster computing software on all fronts could lead to further developments in deep learning.

Titan V users get easy access to facilitate these developments, according to Nvidia. The company noted that users of the Titan V get immediate access to "the latest GPU-optimized AI, deep learning and HPC software" when they sign up for a Nvidia GPU Cloud account for no additional fees.