A new method for storing quantum memories promises to solve the industry's biggest challenge to date: the scale-up of its technologies.

The quantum advantage has been in full display recently with researchers in the field developing novel advancements in everything from unhackable data sharing to actual quantum teleportation. 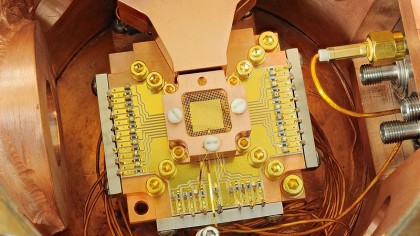 Now, physicists at the University of Alberta in Canada have announced the introduction of a novel "hard drive for light" with the potential to revolutionize quantum communications. The new invention consists of a unique method for building quantum memories that could solve the industry's long-standing scale-up issues.

Quantum memories are devices capable of storing delicate quantum information for a long time with very high fidelity and efficiency. They do this by storing the quantum state of a photon without destroying its volatile quantum data, essentially acting as hard drives do in computers only for quantum networks.

However, their data is encoded on beams of light resulting in processes that have so far been notorious for being technically complex and power hungry. The team's new technology is now promising to enable this much-desired storing ability without the associated current exorbitant power requirements or troublesome technical intricacies.

“We’ve developed a new way to store pulses of light—down to the single-photon level—in clouds of ultracold rubidium atoms, and to later retrieve them, on-demand, by shining a ‘control' pulse of light,” said Lindsay LeBlanc, assistant professor of physics and Canada Research Chair in Ultracold Gases for Quantum Simulation.

LeBlanc was assisted in her research by postdoctoral fellow Erhan Saglamyurek who explained that the key to their work lied in reclaiming the data's original pulse. “This experiment involved taking short pulses of light, in which we could encode quantum information, storing the light in the atoms, and then retrieving the original pulse that carries the same information,” said Saglamyurek.

Both researchers believe their method is ideally suited for applications requiring high-speed operations and could essentially solve the industry's scaling-up issues, the emerging field's biggest challenge to date. “The amount of power needed, for example, is significantly lower than current options, and these reduced requirements make it easier to implement in other labs,” added Saglamyurek.

This is very promising news at a time where the interest in storing quantum data efficiently and effectively is continuously on the rise. The practical applications of the technology range from quantum fiber-optic internet to other methods of secure communication.

Possible future quantum networks, such as quantum repeaters, have even been proposed as solutions for long-distance quantum communications beyond the limit of 200 km. Furthermore, quantum memories have been touted as key to studying how quantum effects such as entanglement can be transferred between physical systems of different natures. The future, it seems, is quantum friendly!

The paper, “Coherent storage and manipulation of broadband photons via dynamically controlled Autler-Townes splitting,” was published in the journal Nature Photonic.

Via: University of Alberta