Ultima Thule's shape is much flatter than initially thought, adding to the mystery of the farthest world ever visited by a probe.

Images of the Kuiper Belt Object (KBO) designated 2014 MU69, nicknamed Ultima Thule, now show that the two lobes of the KBO 4 billion miles from Earth are not spherical as originally thought. Apparently, New Horizons caught it at just the right angle to give the appearance of a snowman in its first images sent back to Earth, but images sent back after it sped past show a very different view of the KBO. 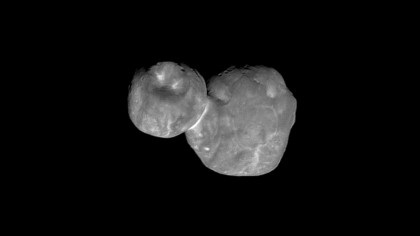 Taken almost 10 minutes after New Horizons’ closest approach to the object, the final images taken of Ultima Thule show the side of the object not illuminated by the sun against the backdrop of distant stars. This has given scientists a way to get a better sense of its shape. Its larger lobe, nicknamed “Ultima,” is flatter than the smaller lobe, nicknamed “Thule,” which is more like a beat up walnut in shape.

“We had an impression of Ultima Thule based on the limited number of images returned in the days around the flyby, but seeing more data has significantly changed our view," said Alan Stern, Principal Investigator of the Southwest Research Institute.

"It would be closer to reality to say Ultima Thule's shape is flatter, like a pancake. But more importantly, the new images are creating scientific puzzles about how such an object could even be formed. We've never seen something like this orbiting the Sun.”

The image sequence released this week were taken as New Horizons flew past Ultima Thule at more than 31,000 mph, at a distance of about 5,500 miles. A string of 14 long-exposure images was pieced together back on Earth to create a movie sequence of the flyby itself. Using this movie, scientists could watch stars blink out of view as the KBO passed in front of them, which—when combined with ground-based data as well as pre-flyby images—gave new insight as to its actual shape.

“The shape model we have derived from all of the existing Ultima Thule imagery is remarkably consistent with what we have learned from the new crescent images," said Simon Porter, Co-investigator for the New Horizons project at the Southwest Research Institute in charge of the effort to model the shape of the KBO.

“While the very nature of a fast flyby in some ways limits how well we can determine the true shape of Ultima Thule, the new results clearly show that Ultima and Thule are much flatter than originally believed, and much flatter than expected," added New Horizons project scientist Hal Weaver, of the Johns Hopkins Applied Physics Laboratory. "This will undoubtedly motivate new theories of planetesimal formation in the early solar system.