New Horizons Sends Back Clearest Images of Ultima Thule Yet

The extraordinary images give us the clearest ever look at Ultima Thule.

NASA released its latest images of Ultima Thule, taken just before its closest approach, offering the highest resolution images of the Kuiper belt object (KBO) yet.

During the historic flyby of Ultima Thule on January 1st of this year, the New Horizons’ mission team took a chance on some precision photography just before its closest approach to the KBO. New Horizons’ has beamed back these images and it turns out they greatly exceeded what the mission team considered a “stretch goal” for the flyby.

This was an exceptional accomplishment, since the high-resolution images, taken by New Horizons’ telephoto Long-Range Reconnaissance Imager (LORRI) just 6 minutes and 30 seconds before its closest approach, was an exceptionally tricky shot to take.

"Bullseye!” said Alan Stern of the Southwest Research Institute and Principal Investigator for New Horizons. “Getting these images required us to know precisely where both tiny Ultima and New Horizons were — moment by moment – as they passed one another at over 32,000 miles per hour in the dim light of the Kuiper Belt, a billion miles beyond Pluto. This was a much tougher observation than anything we had attempted in our 2015 Pluto flyby.

“These 'stretch goal' observations were risky, because there was a real chance we'd only get part or even none of Ultima in the camera's narrow field of view,” he continued.

“But the science, operations and navigation teams nailed it, and the result is a field day for our science team! Some of the details we now see on Ultima Thule’s surface are unlike any object ever explored before.” 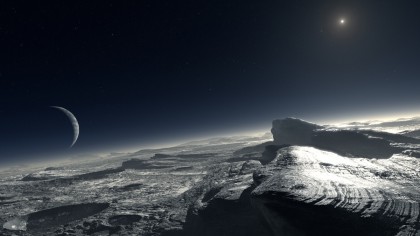 The composite image, made from 9 separate pictures, gives NASA scientists an incredibly detailed picture of the surface of one of the oldest objects in the solar system, a remnant from when the planets were still forming around the sun nearly 4.5 billion-years-ago. One new feature that has been revealed by the image is several dark spots along the terminator, the line separating the sunlit and darkened sides of Ultima Thule.

“Whether these features are craters produced by impactors, sublimation pits, collapse pits, or something entirely different, is being debated in our science team,” said deputy project scientist from the Southwest Research Institute, John Spencer.