The RAD is an interface that can easily be integrated into existing video games. By giving visually impaired people audio cues, it enables them to play video games just as well as sighted people

Over 39 million people are blind around the world with 285 million people visually impaired. For years, the video gaming industry has tried to make their content more accessible for visually impaired and blind gamers. A team of computer scientists created a new user interface giving those blind players a fresh opportunity to win at racing games.

The system was developed by Brian A. Smith, a computer scientist and a PhD candidate at Columbia University's Fu Foundation School of Engineering. Smith named the interface RAD -- short for Racing Auditory Display.

RAD gives visually impaired players information about the race track through audio cues. It uses a sound slider which tells the players about the car’s speed and a turn notification system which alerts notes when a bend in the track is coming up.

It doesn't tell blind players exactly when to turn, but like any good video game, it gives players the information they need. From there, it's still up to the gamers to decide how to act (aka when and how to turn). The interface also includes the same 3D graphics any gamer would expect from an ordinary racing video game.

The player can listen to the audio-based interface, through a standard pair of headphones.

“The RAD’s sound slider and turn indicator system work together to help players know the car’s current speed; align the car with the track’s heading; learn the track’s layout; profile the direction, sharpness, timing, and length of upcoming turns; cut corners; choose an early or late apex; position the car for optimal turning paths; and know when to brake to complete a turn,” said Smith.

Smith worked on the RAD with Professor Shree Nayar. Smith also developed a racing game prototype using the game engine Unity to evaluate how well the audio interface works. He tested his prototype with volunteers from Columbia University along with folks he recruited through the Brooklyn-based Helen Keller Services for the Blind. 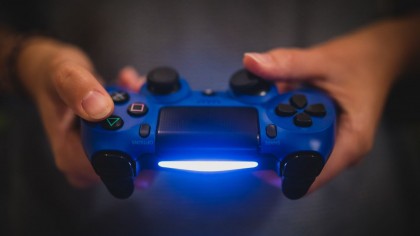 “We’ve actually found that the RAD helps people who are blind, race as well as casual sighted players can,” Smith said. “We compared lap times from sighted people and blind participants, and they were comparable. Now, if you have a really good sighted player, they can do better because they can hug corners even more precisely than what the RAD would allow you to do.

"But the fact that a 3D racing game can be playable by someone who’s blind at a level that’s comparable to sighted players is a completely new thing."

Add more features to the RAD

Smith said he plans on adding more features to the RAD, such as the ability to customize competitors’ cars. Smith said he wants to create auditory interfaces for other types of games, like first-person shooters and role-playing games.

“My hope is that game designers will soon be able to build game systems from a suite of tools that are similarly intuitive and functional to the RAD, and make their video games equally accessible to people who are blind,” Smith said.

“We think the RAD marks the beginning of a whole new suite of such tools.”

At the moment, there are only a handful of games on the market suitable for blind video gamers. Many popular video games offer additional information to blind or visually impaired players; however, unlocking that information can be tedious and ultimately ruin overall gameplay.

Other popular games offer stripped down versions so simple that it removes the challenge of gaming completely for blind players. When making a game accessible to the blind, there has been a fundamental tradeoff between preserving its full complexity and pace. Smith and the team behind RAD hope they've finally struck the balance between the two.