A new image making the rounds on the internet today appear to show the soon to launch Motorola RAZR, a foldable smartphone based on Motorola's popular mid-2000s design.

News and rumors alike of Motorola’s reboot of the Motorola RAZR, their one-time champion mobile phone from the early 2000s, have been swirling for months now after patent filings by the company appeared to show a new foldable smartphone that looked an awful lot like the old RAZRs. First uncovered by SlashLeaks, three new images show off various parts of the product and look a lot like the kinds of publicity photos released ahead of a product launch.

In one image, the clamshell device is shown open and standing up next to its product packaging, a pretty sleek three-sided box that looks exactly like the kind of box you’d expect to contain the Motorola RAZR. The other images show the entire packaging unboxed and another shot shows the back of the phone when it is half closed, though the outside screen is not visible in the picture.

RELATED: LENOVO'S MOTOROLA RAZR WITH A FOLDABLE SCREEN MIGHT BE JUST AROUND THE CORNER

Without question, this is a Motorola RAZR, as far as the design goes, as to whether the images are real, it's anyone's guess. Still, there's reason to be hopeful.

Last February, Sarang Sheth sent us a series of gorgeous renderings of the Motorola patent filing Sheth produced for Yanko Design that added life to the schematics, and most of us were hoping that those renderings would prove accurate. Those renderings mostly match what's shown in these photos from what I can tell. 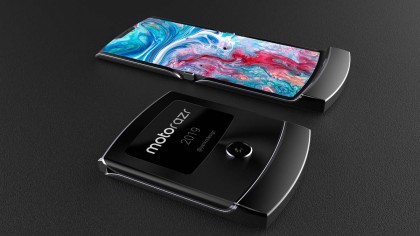 The new Motorola RAZR design more or less perfectly updates the old design to accommodate a full smartphone display but beyond that its the same phone we all had in 2005. The new images don't show the phone screen when it is closed, so there's no way to tell if Sheth's renderings of the outside will 100 percent bear out, but so far, there's every reason to suspect that they will. If these newly leaked images are real images of the new Motorola RAZR, they confirm that Sheth's renderings were spot on, meaning things are looking very good for the relaunch of Motorola's classic device.

Our Brains Reward Us For Travel and New Experiences, New Study Shows