Apple iPhone's 10th year launch anniversary in the fall of 2017 is expected to be celebrated by revealing a new premium model in a few months time. Yes, you guessed that right, the next-in-line iPhone 8 model. And just to stir up some hype with iPhone fanatics, raw photos of the new model were leaked online with some pretty neat feature predictions we can all expect from the new Apple flagship.

Form is 100% confirmed.
Touch ID in power button or display. (99% NOT on the back) pic.twitter.com/Hzj0dihcFe 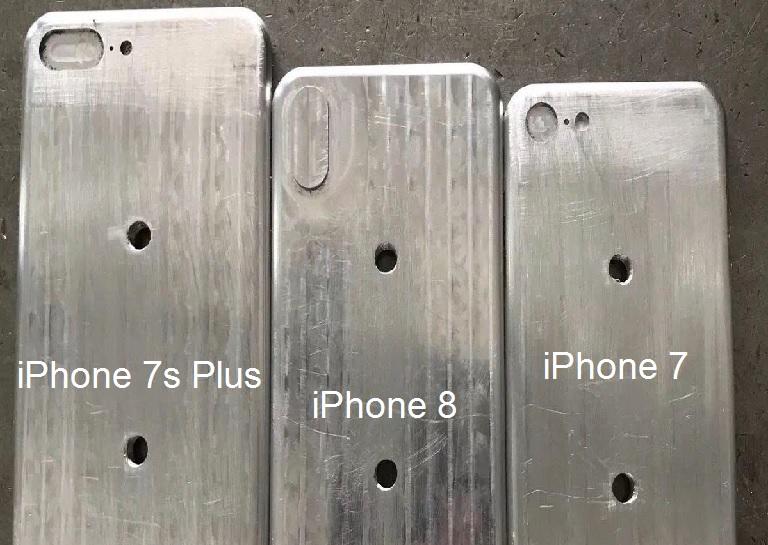 So far, the new iPhone model is predicted to have a glass and stainless steel with a new frameless OLED screen, a new in display Touch ID coupled with facial recognition, 3D Touch updates, wireless charging, improved waterproofing, and more. The rumored advancement of the biometric security could mean that the circular home button may well be eliminated in the new model. Because there is a large population of iPhone users who still haven't upgraded their iPhone 6 to one of the latest iPhone 7 line, analysts are predicting that the iPhone 8 will outsell its predecessors.

A trustworthy insider from the accessory industry revealed to Engadget highly detailed CAD file of the impending iPhone 8, although they weren't at liberty to release the photos this is what they had to say about it.

"The most obvious takeaway here is the dual camera's new orientation, and that both the microphone plus the flash will be part of the camera bump. While the contour may look familiar, the back of the device will actually be covered in glass this time, which allows for the integration of wireless charging. This is hinted by what appears to be a carved out area for a wireless charging coil on the underside of the chassis".

From Engadget's latest update a few days ago, their reliable source has revealed exclusive renders of the back design of the new iPhone model.

With some of the technical features predicted, there is probably one more important information you're itching to find out. How much will this latest model cost so you can start building up your funds. Well, according to UBS analyst Steven Milunovich, the starting price for an average iPhone 8 may be ranged at around $870, while an upgraded model with 256GB of storage capacity may cost $1,070. Milunovich also predicts that the redesigned iPhone will account for up to 45% of Apple's sales in the coming year. However, the storage capacity one can get with the $870 iPhone 8 version was not disclosed.

Speculations about the release date of the iPhone 8 are placed around September 2017, which coincides with the 10th year anniversary of the firm's first iPhone launch from 2007. But other reports say that it may not be available for sale until next year due to "technical issues" shrouding the Touch ID sensor.

If this is Apple's way of igniting everyone's excitement over the impending reveal of their latest flagship then it worked. We are very curious now, and we're sure to keep our eyes peeled for official news from Apple themselves.