Chemists from the University of Glasgow outlined a new flow battery model for electric cars.

Thanks to the combined efforts of dedicated engineers and industry leaders over the past decade, support behind electric cars, both in terms of efficiency and sustainability, has grown dramatically. Still, however, one of the small feasibility glitches that affect sales relates is the issue of recharging.

A liquid battery which is being developed is helping to change the narrative and answer some of the questions of practicality related to recharging which continue to come up. A team of chemists based at the University of Glasgow has developed a liquid flow battery that uses a hydrogen gas or electric power-storing nano-molecule: the result is a new and dynamic form of energy storage. Named the ‘hybrid-electric-hydrogen’ flow battery by the team, the stored energy can be released later in liquid form, providing necessary fuel in either form.

This is promising news, as the projected goal is to create a setup in which charging can be completed in the same time that is typically required for refueling with petrol. Now the average charging time ranges from 30 minutes to upwards of a few hours.

The results of their research efforts appeared in an article, titled “Highly reduced and protonated aqueous solutions of [P2W18O62]6- for on-demand hydrogen generation and energy storage”, this week in the Nature Chemistry journal.

Paper co-author and University of Glasgow Chemistry Chair Professor Leroy Cronin spoke about the aims of the research as well as the potential impact it could have on the industry:

“For future renewables to be effective high capacity and flexible energy storage systems are needed to smooth out the peaks and troughs in supply,” adding, “Our approach will provide a new route to do this electrochemically.”

As the beginning steps of laying a sustainable charging network that matches e-car demand continue, the sometimes incompatible aims of supplying the cars amidst disappointing demand remains a frustration in the industry. 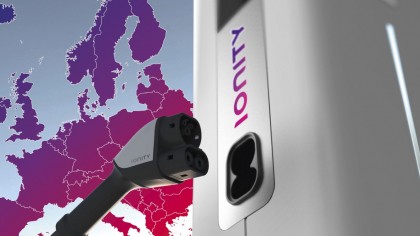 "The partnership ... aims to establish 'thousands' of stations along European highways by 2020, the automakers said ... The rare broad-based cooperation shows the strains on carmakers as they invest billions of dollars to develop battery-powered vehicles to comply with tighter environmental regulations. Buyers have so far shown little interest in the models because of limited driving range, the time needed for recharging and the high price of vehicles."

Electric car makers have the two-fold task of both educating (and selling, because for all their advantages, if e-cars are not convenient to charge, motivation to purchase will not increase) the public on the benefits of electric cars as well as engaging in ambitious research and development efforts. Innovations like these, thankfully, are helping provide a solution that doesn’t saddle automakers with exorbitant costs.

The research was published in Nature Chemistry.