Looks like NASA engineers have been working closely with Batman characters Alfred Pennyworth or Lucius Fox to develop this brand new Mars rover concept, that is designed to carry people across our closest planetary neighbour, Mars.

Before the official announcement from NASA earlier this month speculation had been building on a Reddit thread questioning "what is this thing?." 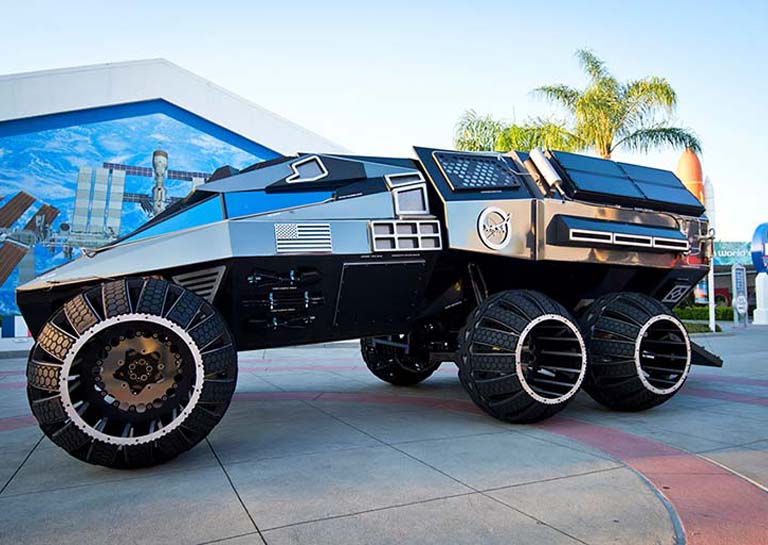 We now know the rover is a wheeled vehicle designed to transport up to four astronauts at a time. The out-of-this-world rover even comes ready with a detachable laboratory. The Mars rover runs off of solar power, transporting with it a 700-volt battery.

The vehicle is a prototype NASA rover used for the Kennedy Space Center's "Summer of Mars" public education series. It isn't likely to be getting produced on a massive scale yet but it will travel across the country in hopes to inspire people throughout the United States to learn more about space exploration.

While there are no new manned missions planned for Mars at this stage, the Rover announcement shows that NASA is very much thinking about how to move humans around the red planet.

While this particular concept vehicle won't travel to Mars, it doesn't mean it was an easy or cheap project. Brothers Marc and Shanon Parker were approached by NASA with the idea. Parker Brothers Concepts specializes in "outlandish" rides for films and tv shows. Marc Parker told Business Insider that they built the ride from scratch between November 2016 to early April 2017.

Parker noted he and his team had to follow the same parameters NASA has to meet in its new legal mandate to put a man on Mars by 2033.

It could either be a scouting vehicle or a full research lab. They effectively left everything else up to Parker Brothers Concepts.

"What we actually came up with was a dual-purpose vehicle. It actually separates in the middle. The rear section is a full lab, the front area is a cockpit for going out and doing scouting," he said. "The lab section can actually disconnect ... and be left on its own to do autonomous research. That way the scout vehicle can go out to do its thing without the fuel consumption and extra weight, then come back later."

For more information about Kennedy Space Center's summer of Mars events, check out their website. Admission is also free to incoming fifth-grade students to get the most out of the events. The website very briefly mentions the Mars Rover concept.

"The rover will become a part of the new astronaut training experience, opening fall 2017," the space center noted. "The Mars Rover will tour select cities on the east coast this summer. Cities and dates coming soon."

Editor's Note: The post has been updated after the official reveal.

SEE ALSO: You Can Now Ride Your Very Own "Tron" Light Cycle

The Mars Perseverance rover is nearing its main mission target