New Material so Black it Can't be Measured

You might remember vantablack, a material that can absorb 99.96% of all of the light that hits it, but there's a new more improved material that was just created. Vantablack is created using tightly packed carbon nanotubes thinner than a human hair. Nanotubes packed so closely create an environment where the light waves cannot be reflected outward resulting in almost complete internal reflection. Researchers at Surrey Nanosystems have just broke their own record and created a material so black that cannot even be measured under a spectrometer according to Tech Insider.

The inability of measurement means that more than likely 99.99% of all light that is directed towards the material is absorbed, making it "the blackest material ever created" according to Surrey NanoSystems. This new vantablack is so black that our eyes have trouble processing something that reflects so little light. In the testing video below, the researcher shines a red laser pointer across the material demonstrating the incredible light absorption capabilities on the material.

The material has a few applications in the space industry like calibration of optical sensors within satellites or aboard the ISS in order to pick up light from further reaches of the atmosphere. While the new vantablack is strong, just a few drops of water can completely destroy its ability absorb almost all of the directed light.

Unfortunately, it cannot be adapted into pigment, making paints or other liquid properties unachievable at the current state. Being made up of carbon nanotubes, this also means the material is relatively expensive although given it's application in space, those who purchase it will likely shell out whatever price is desired. 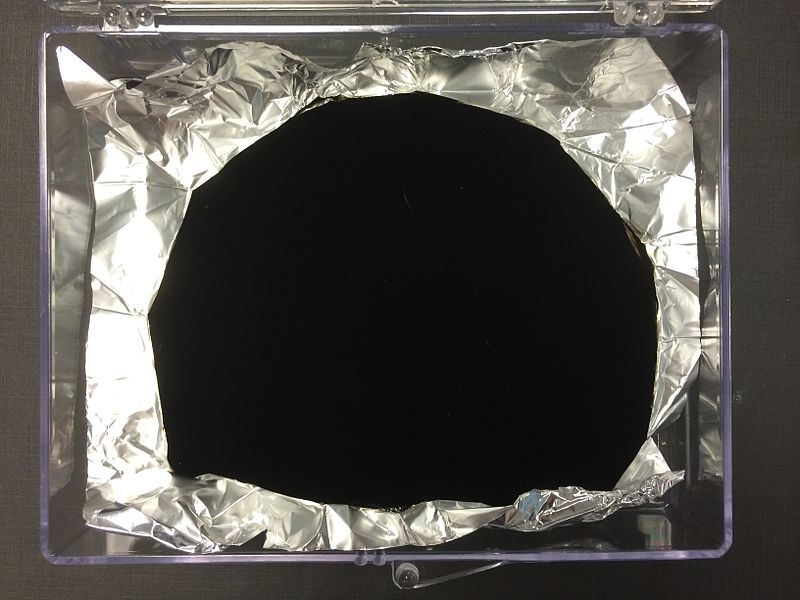 To put into perspective how the incredibly dark material could be used to calibrate optical sensors imagine the night vision capabilities of the human eye. If your eye is subjected to absolute darkness, even the faintest of lights would seem bright as day. This effect would be exponentially increased when using some of the most complex optical sensors on the market today.

SEE ALSO: The world’s most expensive material is valued at $145 million per gram

A New Material Can Block Out 94% of Noise. Even in a Jet Engine