Researchers have created an experiment that results in cyborg-like cockroaches that could one day assist in everything from search and rescue operations to national defense.

Isn't it surprising how we humans change our likes about certain things or people based on how useful they are to us? If a cockroach were to run around the kitchen, we are soon to freak out and get the exterminator spray.

But do you know that these cockroaches might soon come to our aid, or even get us out of potentially life-threatening experiences? Get ready to grow a soft spot for them!

It might sound unbelievable, but two researchers from the University of Connecticut have developed a microcircuit (or a neural Controller) that can turn a cockroach into a cyborg that can obey our commands.

How two researchers took control of a roach

Abhishek Dutta, Assistant Professor of Electrical and Computer Engineering and Evan Faulkner, his junior undergraduate, teamed up to build a circuit that can control insects. The subject that they used to test it is a Madagascar hissing cockroach.

They made the circuit into a form factor that can be easily placed on top of the cockroach. Then by connecting the wires of the microcircuit to the antennae lobes of the cockroach, the researchers can control the roach by giving electrical signals to the lobes.

Going in detail, the short electrical pulses that are sent to the wires are perceived by the insect as obstacles. Hence, if the signal is sent to the right lobe, the roach will move away towards the left and vice versa.

By successfully controlling each signal with minor adjustments and variations, the researchers were able to control the movements of the roach.

This isn't the first time that researchers have managed to create remotely controllable insects. However, this particular case is more interesting because of the level of technology used and its subsequent results.

"The use of insects as platforms for small robots has an incredible number of useful applications from search and rescue to national defense," added Dutta. The researchers didn't only go with a microcontroller that only houses a wireless transponder and a controlling mechanism.

Instead, they included additional tech to reduce errors and pave the way for more streamlined control. The microcircuit included has a nine-axis inertial measurement unit and a temperature sensor.

The movement recorder helps the researchers to find the orientation of the cockroach and the temperature sensor can help in determining where it might go without any external stimuli, as cockroaches prefer warm conditions to walk.

A huge achievement for Bio-Robotics

The results certainly give us hope of a future tech that can merge with living beings and can help in various situations of need. 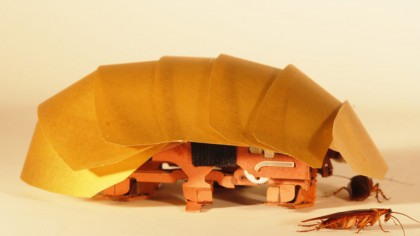 And animal activists can rest easy. You don't have to worry about the roaches being tortured to death, as this experiment poses no threat to the insect.

The microchip that rests on its back is featherweight and the electrical impulses are like the exact ones that they get when they are out in the wild. The researchers used Bluetooth transponders to communicate with the circuit.

The work is nowhere near perfect though and the researchers are fighting to refine the technology to its absolute extent. We can surely hope to see more research and experiments based on the current findings of Dutta and Faulkner.

Their research paper is soon to be published in the Proceedings of the Conference on Cognitive Computational Neuroscience.

Via: University of Connecticut

Savannah Monitor Lizards Have Mammal and Bird-Hybrid System for Breathing