University of Michigan researchers created a breakthrough organic photovoltaic with an efficiency comparable to inorganic solar cells currently on the market.

By  Shelby Rogers
Apr 25, 2018
University of Michigan via Science Daily

For decades, the goal with solar power has been developing efficient solar cells at a relatively low cost. A team of engineers from the University of Michigan seems to have done that with organic solar cells. These new commercially viable cells boast an impressive 15 percent efficiency -- comparable to what many traditional solar panels have on the market.

Traditional organic solar cells work by adding carbon into the building process. It's often two semiconducting layers of plastic polymers and other materials. The cells absorb light, which causes a photon to knock electrons from a polymer atom and create an exciton. The exciton splits, and the process continues. The movement of these electrons from empty hole to empty hole on a cell produces the electric current.

Organic solar cells are also less costly than their more conventional counterparts. Silicon-based inorganic panels with thick, rigid sheets take extensive installation as well. However, the team's carbon-based solar cells and others like it could be built cheaply in rolls of material much more flexible than standard solar cell materials. This would allow the cells to even curve around things within an environment like a curved wall.

"For the last couple of years, efficiency for organic photovoltaics was stuck around 11 to 12 percent," said Xiaozhou Che, a doctoral candidate in the Applied Physics Program and first author of a new study published in Nature Energy.

"By themselves, the cells achieve 10- to 11-percent efficiency," Che said. "When we stack them together, we increase light absorption and efficiency improves to 15 percent with an antireflection coating."

The University of Michigan researchers needed to create an entirely new process. They developed interconnecting layers to prevent damage to the first cell. It also let light and electrical charge pass through the system.

"That's considered a difficult process because there's a chance the liquid used in processing the top cell will dissolve the layers already deposited underneath," Che said. 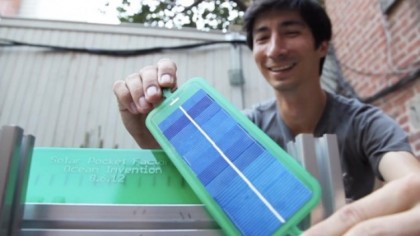 The team also demonstrated that their new materials, design, and process have a fabrication yield of over 95 percent. In short, that means nearly all devices were successfully created without shorting out. This fabrication yield bodes well should the team look to scale up the manufacturing process to an industrial level.

The team hopes they can continue to boost the efficiency of this new technology to even higher standards.

"We can improve the light absorption to increase electric current, and minimize the energy loss to increase voltage," Che said. "Based on calculations, an 18-percent efficiency is expected in the near future for this type of multijunction device."