Researchers have stumbled upon a new and very promising nano-based technique which identifies cancer cells in the body.

Although we have come leaps and bounds in terms of cancer diagnosis and treatment methods, oncology still boils down to a technical and very nuanced numbers game.

The good news is that thanks to new drug compounds and the emerging effectiveness of gene-editing tools, killing cancer cells has become an easier task.

Despite these advances, for cancer sufferers the lingering question of Will it come back? lingers, which is why the development of effective cancer biomarkers is crucial.

Now, a team of researchers from the Australian Institute for Bioengineering and Nanotechnology (AIBN) has come up with a new biomarker detection using an epigenetic approach to compare healthy cells and cancer cells.

With a nano-based approach in mind, the researchers focused their efforts on circulating free DNA (cfDNA), DNA which is released as part of the life cycle of cells.

Specifically, they looked at methylcytosines--a kind of methyl-enhanced DNA--and the unique physical and chemical properties they give to cancer cells.

Comparing cancer cells and healthy cells and looking for the signs of epigenetic reprogramming that had occurred gave the researchers distinct picture of which cells were cancer cells.

They found that the DNA changes were consistent for every type of cancer, which is a breakthrough in terms of establishing a consistent cancer biomarker.

As AIBN researcher and study researcher Dr. Abu Sina explains: "Because cancer is an extremely complicated and variable disease, it has been difficult to find a simple signature common to all cancers, yet distinct from a healthy cell."

Study co-author and AIBN researcher Dr. Laura Carrascosa enthusiastically adds: "There's been a big hunt to find whether there is some distinct DNA signature that is just in the cancer and not in the rest of the body."

Most promising for the researchers is that they could produce their results with (1) the use of quick assays, (2) an analysis time that doesn't exceed 10 minutes, and (3) a minimal amount of sample preparation as well as DNA input.

As AIBN Professor of Chemistry and study co-author Matt Trau, explains:  "This [technique] happens in one drop of fluid. You can detect it by eye, it's as simple as that."

"We certainly don't know yet whether it’s the Holy Grail or not for all cancer diagnostics, but it looks really interesting as an incredibly simple universal marker of cancer, and as a very accessible and inexpensive technology that does not require complicated lab-based equipment like DNA sequencing," the team explains. 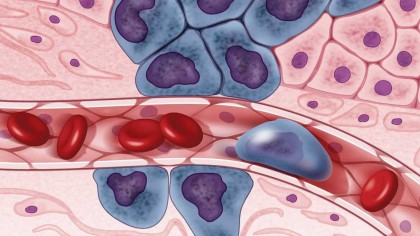 This landmark study and the related technique stand to change the way we think about cancer cell detection in the medical field.

The closer we come to fill in the information and uncertainty gaps surrounding cancer, the more confidently we will begin to apply existing as well as emerging methods.

Details about the study appear in a paper, titled "Epigenetically reprogrammed methylation landscape drives the DNA self-assembly and serves as a universal cancer biomarker", which was published December 4th in the Nature Communications journal.