The head of the International Air Transport Association reportedly predicted that the return of the Boeing 737 MAX 8 aircraft to service wouldn't happen until August at the earliest.

In a new report from Heekyong Yang over at Reuters, the Director of the International Air Transport Association (IATA) has said that the Boeing 737 MAX 8 aircraft will likely remain grounded until August at the earliest, though regulators will have the final say on the matter.

The report pushes back even further the date of the return of one of the most widely used planes in the world to service, raising serious questions about whether the plane's reputation is salvagable at this point. “We do not expect something before 10 to 12 weeks in re-entry into service,” said Alexandre de Juniac IATA Director General in a conference with reporters in Seoul, South Korea. “But it is not in our hands. That is in the hands of regulators.”

The IATA is currently organizing a conference of airlines, Boeing, and international regulators in just over a month to work how to get the 737 MAX 8 back in the air though others told Reuters that the Federal Aviation Administration (FAA)--who is currently reviewing the safety procedures for the entire 737 line of aircraft to ensure that nothing is missed before the plane is certified to flay again--is expecting to have the certification of the aircraft complete by middle to late June.

The plane, Boeing's most popular aircraft with more than 400 units in service with airlines around the world, has been grounded since the middle of March following the crash of Ethiopian Airlines flight 302 from Addis Ababa, Ethiopia, less than 5 months after the crash Lion Air flight 610 from Jakarta, Indonesia.

Both planes were Boeing 737 MAX 8 aircraft and preliminary investigations and data recovered the two plane's black boxes indicated that the two planes went down after a malfunction in the Maneuver Characteristic Augmentation System (MCAS), a new system Boeing integrated into the 737 MAX 8 that would force the nose of the plane down if its single sensor detected an angle of attack that risked stalling out the aircraft.

157 and 189 passengers and crew died in the crashes of Ethiopian Airlines 302 and Lion Air 610, respectively. 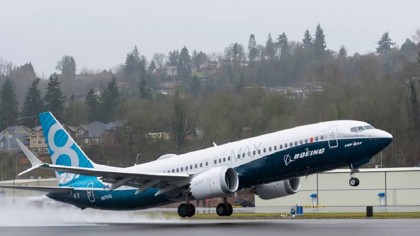 The MCAS has come under scrutinity after the flight profile of the two planes appear to show that just prior to their crash, the pilots engaged in an extended tug-of-war with the aircraft's autopilot, trying to keep the nose of the plane up while the autopilot would repeatedly ratchet the nose of the aircraft down, so that in as little as 40 seconds, a plane would enter into a terminal dive that the pilot wouldn't be able to recover from. Online database of pilot complaints about the system show that the kind of "nose-down" incidents with the 737 MAX 8 weren't as rare as Boeing had originally planned for, leaving many pilots in the dark about even the existence of the system, much less it's proper operation.

Boeing has taken a substantial hit to both its prestige and its bottom line over the grounding. It has been forced to suspend all earnings projections for the year until the uncertainty of the 737 MAX 8 is worked out, and it has already lost over a billion dollars due to the groundings and that number is definitely out of date. Orders for the 737 MAX 8 have dried up and given the controversy around the aircraft, there is every reason for airlines to take a pass on the aircraft going forward even after the plane is recertified.

The 737 MAX 8 has been toxified to such an extent that you absolutely could not blame passengers for refusing to fly on the planes at all. Sunk costs are one thing, but it's doubtful you'll see many airlines jumping at the chance to buy a 737 MAX 8 after this. That's a major problem for Boeing, who was counting on the 737 MAX 8 to be the aircraft that went toe-to-toe with the Airbus A320neo, a more fuel efficient airplane than many current airline inventories. Now, it's a safe bet that the road back to the top for the 737 MAX 8 will likely prove to be impossible.