Researchers have reevaluated long held beliefs about the probability of extraterrestrial life.

A new study from the Future of Humanity Institute (FHI) at Oxford University, suggests that we are the only intelligent life in the observable universe. The institute re-evaluated the so-called ‘Fermi paradox’ that addresses the disparity between the expected probability of extraterrestrial life in the universe and the apparent lack of evidence of extra-terrestrial intelligence (ETI).

The paradox is named after the physicist, Enrico Fermi who first proposed it in the early 1950’s. The new evaluative study titled "Dissolving the Fermi Paradox", began by first examining the Drake Equation.

The equation, posed by astronomer Dr. Frank Drake in the 1960s is based on a number of hypothetical values, it has traditionally been used to demonstrate that even if the amount of ETI is small, the sheer multitude of possible places for it to be should give a large number of potentially observable civilizations.

Mathematically, this is expressed as:

The new research questions how using hypotheticals can lead to extraordinary exaggerated results. “When people discuss the [Drake] equation it is not uncommon to hear them say something like: ‘this parameter is uncertain, but let’s make a guess and remember that it is a guess,’ finally reaching a result that they admit is based on guesses,” Dr. Anders Sandberg, one of the study’s authors, told Universe Today.

“This often leads to overconfidence, and worse, the Drake equation is very sensitive to bias: if you are hopeful a small nudge upwards in several uncertain estimates will give a hopeful result, and if you are a pessimist you can easily get a low result.”

To better understand the possibilities of the equation the researchers assigned each of the equation’s parameters a range from the smallest to the largest values they could possibly have, based on current knowledge. This approach led to results wherein a third of the cases, the galaxy would be absolutely devoid of intelligent life anywhere else but on Earth.

The scientists are quick to point out, that their findings don’t mean they believe that looking for extraterrestrial life is pointless. Not at all, they just believe at this very moment it is unlikely that there are other intelligent civilizations but that can change at any time. 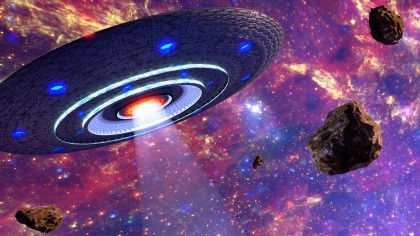 What is the First Thing You Would Say to an Alien? 17 Funniest Things Aliens Need to Know About Us

"What we are not showing is that SETI is pointless – quite the opposite!" said Dr. Sandberg. "There is a tremendous level of uncertainty to reduce. The paper shows that astrobiology and SETI can play a big role in reducing the uncertainty about some of the parameters.

Even terrestrial biology may give us important information about the probability of life emerging and the conditions leading to intelligence. Finally, one important conclusion we find is that lack of observed intelligence does not strongly make us conclude that intelligence doesn't last long: the stars are not foretelling our doom!"