French researchers discovered that skin cells can pass the tattoo pigment to new cells when they die.

New research from France advanced a step further to understand why tattoos despite their removal last forever. A team of researchers led by Sandrine Henri and Bernard Malissen of the Centre d’Immunologie de Marseille-Luminy discovered that the skin cells pass the tattoo pigment to new cells when they die, keeping the tattoo permanent.

The team developed a genetically engineered mouse and tattooed its tail. The ink was picked up by the macrophages (immune cells residing in the dermis), but even after killing off these macrophages, the tattoo appearance did not change.

The researchers determined that the cause of tattoo reappearance was due to new macrophages derived from precursor cells, which picked up the pigment released by the dead macrophages over a span of few weeks.

Prior research already confirmed that macrophages are attracted to the wound caused by the tattoo needle and absorb the pigment just like the way these cells eat up an invading pathogen to keep the body immune from diseases. 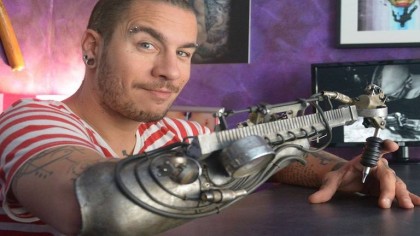 The research team also observed that the cycle of pigment capture, release and recapture is a continuous process. This was confirmed when they transferred a piece of tattooed skin from one mouse to another, and within six weeks, the recipient mouse was also carrying the tattoo pigment.

“We think that, when tattoo pigment-laden macrophages die during the course of adult life, neighboring macrophages recapture the released pigments and insure in a dynamic manner the stable appearance and long-term persistence of tattoos,” Henri said.

The research, however, opens up new possibilities to improve the ability of the laser surgery to remove the permanent tattoo and help people looking to come out from the circle of tattooed life. The skin cells can be made to die with laser pulses and the resulting pigment released from these cells can be carried away from the skin and transported to the lymphatic system of the body.

“Tattoo removal can be likely improved by combining laser surgery with the transient ablation of the macrophages present in the tattoo area,” said Malissen. “As a result, the fragmented pigment particles generated using laser pulses will not be immediately recaptured, a condition increasing the probability of having them drained away via the lymphatic vessels.”

Tattoos are increasingly becoming a commonplace since last few years. Statistics show that 40% of U.S. adults, aged between 26-40, have at least one tattoo permanently inked on their skin. And with the growth in the number of tattoo applications, there’s an equal amount of rising in the removal procedures.

Not too long ago, researchers at Princeton University developed a new laser method to make tattoo removal safe and effective. Their technology makes use of very short pulses of low-energy laser light, which is delivered in rapid succession to break the bonds between ink molecules without heating the skin tissue.

These broken molecules are then transported out of the skin or are diluted in the bloodstream and later excreted from the body.