University of Connecticut bioengineers developed a new way to use the proteins of spider silk into a biodegradable adhesive for healing major bones.

Spider silk is some of the strongest, most durable natural creations around. A team of bioengineers created a way to leverage the power of spider silk in order to repair broken bones.

The team from the University of Connecticut used silk fibers in order to create a new biodegradable composite specifically for repairing load-bearing bones like ones found in the leg.

The researchers hope that their creation can bypass the traditional headaches and complications that come along with healing major bones. More often than not, doctors tasked with setting and fixing load-bearing bones install metal plates to fuse the bones back together. While the metal holds the bones in place, some metals can leach ions into other tissues. This leads to irritation and often more complications than the break originally had. 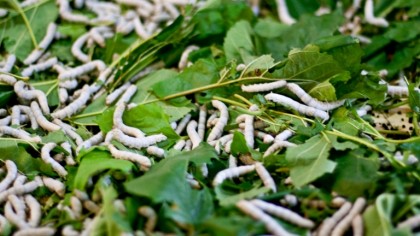 UConn professor Mei Wei wanted to offset those issues and put her materials science and biomedical engineering expertise to solve the problems. Wei used a protein found in most spider silks called silk fibroin -- the insoluble protein that helps spiders and moths create such tough silks with high tensile strength.

While Wei's creation is garnering praise among her peers, she knows that she and her research partners could improve the process even more by using silk fibroin.

“Our results are really high in terms of strength and flexibility, but we feel that if we can get every component to do what we want them to do, we can get even higher,” said Wei, who also serves as the School of Engineering’s associate dean for research and graduate education.

Silk fibroin has been used in other projects too. In 2016, it was used to enhance the shelf-life of fruit as a unique food-preservation coating. It has also been used for tissue regeneration thanks to its good biocompatibility to mammal cells. While the medical community has known about the power of silk fibroin for years, Wei and her team are the first to attempt a dense polymer composite with the protein structures.

Wei knew that in order for her project to succeed, however, she needed to create the best healing device that would challenge traditional bone setting -- especially for load-bearing bones.

Wei collaborated with UConn associate professor Dianyun Zhang who works as a mechanical engineering professor. Wei had to craft a composite that was both strong and stiff but not too dense that it would limit bone growth. The composite also needed to be flexible in order for patients to keep a natural range of motion, unlike the stiffness that often comes with other forms of bone setting.

One of the best parts about silk fibroin compared to a metal plate in a leg? The composite starts to degrade after a year of being in place. There's no further surgery needed for removing the substance after a major bone has healed.

Wei, Zhang, and the other team members have begun testing derivatives of the silk fibroin composite. They're combining the protein with other composites in order to make a stronger substance that can bear more weight.

Via: University of Connecticut Today