New Robot Swims With No Motor and No Battery

Caltech researchers have successfully engineered mini robots that can propel themselves and navigate their way through water using their own bodies' reactions to different temperatures.

By  Loukia Papadopoulos
May 19, 2018
California Institute of Technology

The California Institute of Technology (Caltech) announced in a paper published in the Proceedings of the National Academy of Sciences this week that its engineers in collaboration with ETH Zurich have successfully developed robots that can swim without a motor or even a power supply. These first-of-their-kind aquatic robots use self-propulsion to navigate through the water.

The philosophy behind the devices is rather simply albeit ingenious. The aquatic machines are made from the material that deforms with temperature changes, shrinking and expanding to propel these mini robots through the water as if they were swimming.

"Our examples show that we can use structured materials that deform in response to environmental cues, to control and propel robots," said Daraio in a statement, professor of mechanical engineering and applied physics in Caltech's Division of Engineering and Applied Science, and corresponding author of the paper.

Based on previous Caltech work

The research is based on work by Daraio and Dennis Kochmann, professor of aerospace at Caltech. The previous study saw Caltech and Harvard engineers design soft mechanical chains that had the ability to transmit signals across long distances.

The study had concluded that these flexible circuits could effectively be used in soft robots. Now, engineers have based their new propulsion system on a flexible polymer that curls up in cold temperatures and stretches out in hot ones.

Propelled by a paddle

This polymer’s movements activate a switch in the robot's body attached to a paddle. Once the paddle is triggered it behaves like a rowing paddle pushing the small robot forward.

The polymer strips have the unique ability to behave differently according to their thickness. Therefore, the engineers used a variety of strip sizes to generate different responses at different times resulting in robots that can swim at different speeds and directions.

The engineers were even successful in making the mini robots drop off a payload. "Combining simple motions together, we were able to embed programming into the material to carry out a sequence of complex behaviors," says Caltech postdoctoral scholar Osama R. Bilal, co-first author of the paper.

The team is now researching adding other functionalities to the robots such as responding to environmental cues like pH or salinity. They are also looking into redesign the devices to be self-resetting according to temperature shifts, enabling the robots to swim forever. 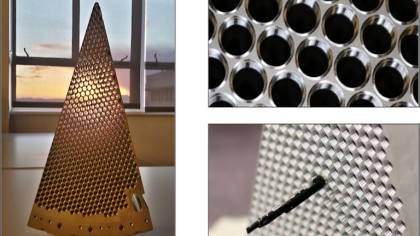 5,000 Mini Robots are Set to Be Launched into Space to Map the Universe

The engineers have some very ambitious potential projects for their little machines such as delivering drugs and even containing chemical spills. This week was an important one of the autonomy of small robots.

Researchers at the University of Washington just announced that they had successfully enabled a robot insect to take off for the first time using new flight-powering technology. Flying insect-sized robots have long been a dream for engineers but the devices have so far been too small to house previous flight equipment.

It seems that mini robots can now both fly and swim. What will they be able to do next?

Morgan Motor Company Is Releasing an All New Three-Wheeler