By  Jessica Miley
Mar 25, 2018
SoFi is a soft bodied robotic fish that will help researchers in underwater environments. MIT

Scientists have developed robotic fish to help them do underwater research. The robo-fish can swim alongside real fish to give new insights into life below.

The robotic fish named SoFi was developed by MIT's Computer Science and Artificial Intelligence Laboratory (CSAIL) can be controlled with sound. SoFi swims by flapping its hydraulic-pump powered tail back and forth.

The clever robot can also control its own buoyancy through adjusting an internal foam material. During test dives in the Rainbow Reef in Fiji, SoFi was able to swim down 15 meters for more than 0 minutes at a time.

It could navigate and respond to current and avoid collision with coral. During the swim, SoFi collected data by taking photos and videos using its built-in fish eye lens camera.

The research team have also developed a controller for SoFi that allows a researcher to be underwater with the robo-fish controlling it to look for specific items. The controller is created from a waterproofed Super Nintendo controller.

“To our knowledge, this is the first robotic fish that can swim untethered in three dimensions for extended periods of time,” says CSAIL PhD candidate Robert Katzschmann, lead author of the journal article about SoFi published in Science Robotics.

“We are excited about the possibility of being able to use a system like this to get closer to marine life than humans can get on their own.” SoFi is able to swim close to real fish because it propels themselves forward with a method that mimics the movements of real fish.

To swim, a motor inside SoFi ‘pumps water into two balloon-like chambers in the fish’s tail that operate like a set of pistons in an engine. As one chamber expands, it bends and flexes to one side; when the actuators push water to the other channel, that one bends and flexes in the other direction.’ 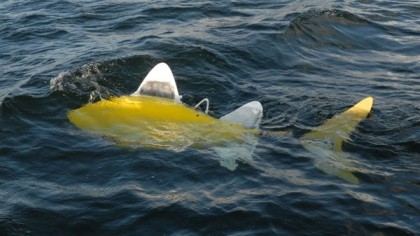 These alternating operations mean SoFi sways or wags like a real fish allowing it to mingle with other fish without detection. SoFi can travel at a speed of approximately half a body length per second. SoFi is made from a combination of hard 3D printed plastic and soft silicon rubber and flexible plastic.

Robot Fish can get to hard to reach places

The robotic fish will allow researchers to study schools of fish and delicate coral otherwise difficult to access.

SoFi has been designed to be as non disruptive as possible in its environment.“The robot is capable of close observations and interactions with marine life and appears to not be disturbing to real fish,” says CSAIL director Daniela Rus

SoFi’s soft body means the researchers can put it into more complex environments without the worry of major damage being sustained. “Collision avoidance often leads to inefficient motion, since the robot has to settle for a collision-free trajectory,” explains Rus.

“In contrast, a soft robot is not just more likely to survive a collision, but could use it as information to inform a more efficient motion plan next time around.”