Nan Madol is an ancient city built on a coral reef thousands of miles from the coast of Los Angeles, some believe it once housed the capital of an ancient world while others think it's a cursed place.

New images have been released showing what appears to be a lost city in the middle of the Pacific Ocean. Called Nan Madol, this ancient and outlying isle has long evaded researchers, but since the advent of modern imaging technology experts now have access to what was once the seat of the Saudeleur Dynasty (1100 CE to 1600 CE).

Nan Madol which translates to “the space in between” rests on a coral reef off the coast of Pohnpei, the island capital of the Federated States of Micronesia, approximately 4,000 kilometers (2,500 miles) from Los Angeles and 2,575 kilometers (1,600 miles) from Australia.

Science Channel’s online series, “What on Earth?” explored the origins of this mysterious place which locals call “the ghost city.” Satellite images of the grid show 97 geometrically similar islets on the island’s coastline. The general infrastructure of the city is unknown, and the lives of the former inhabitants remains a mystery.

“As amazing as this site appears from satellite imagery, coming down to ground level is even more astounding. There are walls which are 25 feet tall and 17 feet thick,” Karen Bellinger, explains in the clip.

Theories abound as to what this place was meant for; some believe it had political clout.

“The tomb of the first chiefs of Pohnpei is a century older than similar monumental burials of leaders on other islands.”

“To me, in its prime, Nan Madol was a capital,” McCoy added. “It was the seat of political power, the center of the most important religious rituals, and the place where the former chiefs of the island were laid to rest.”

Another strange aspect of Nan Madol is its location, as Dr. Patrick Hunt, an archaeologist at Stanford University, points out in the episode, "Why would somebody build a city out on the middle of the ocean? Why here, so far away from any other known civilization?”

Nan Madol is the only ancient city on earth built onto a coral reef and the structures on the island are made of stone so heavy, it's perplexing as to how ancient residents were able to lift them. Scientists believe they moved 1,850 tonnes every year. 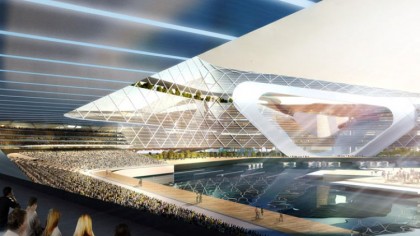 Many Pohnpeians believe they used magic to fly them. There are also no distinctive markings or insignia to divulge the former inhabitants, all that remains is a legend of the people allegedly from there, called the Saudeleur.

“Descendants of two brothers of unknown provenance who founded a religious community in the sixth century focused on the adoration of the sea. On their third attempt to build their political, religious and residential center, they settled on this patch of coral flats,” writes Christopher Pala of the Smithsonian, who visited the site in 2009.

After a coup, which overthrew the last Saudeleur ruler. An outsider named Isohkelekel took over and instituted the system of multiple chiefs still present within the modern Pohnpeian community.

Now, perhaps with new imagery will come a better understanding of this esoteric isle.