A data fuelled software tool will help urban planners put bike lanes where they will be most beneficial.

The way we navigate through cities is changing. Many cities are trying to reduce their carbon footprint and reduce the number of emissions creating vehicles. Part of this is a big push to increase cycling. However, research shows that many people are afraid to cycle in urban areas due to the risk of an accident.

Research from the University of Waterloo proved that bike lanes are one way to increase the safety of cyclists. The researchers collected data using sensors and bike cameras from hundreds of kilometers in Kitchener-Waterloo, Ontario.

Cars to close for comfort

The results showed that cycling lanes virtually eliminate vehicles getting too close to cyclists when they pass them.

"Drivers aren't trying to scare cyclists or be inconsiderate," said Bruce Hellinga, a civil and environmental engineering professor at Waterloo. "In many cases, they just don't feel they can leave more space because of the geometry of the road and the proximity of other vehicles."

The researchers have now built upon this work and have developed a tool that lets urban planners select the sites for future bike lanes based on environmental and traffic data.

The software tool predicts the number of unsafe passes on roads based on factors including traffic volume and flow to suggests where bike lane infrastructure would be the most beneficial.

"It's not about giving something to cyclists and taking something away from motorists," Hellinga said. "It's about putting in infrastructure to reduce stress levels and improve safety for both."

Decreasing the stress of cycling is likely to help increase cyclists numbers. The previous Waterloo research showed that on a two-lane road without bike lanes, passing motorists got within a meter of cyclists 12 percent of the time. When the same road had a bike lane, that number dropped to just .2 percent.

On larger four-lane roads the uncomfortable passing distance dropped from almost six percent with no bike lanes to .5 percent with bikes lanes. The research was motivated, in part by the personal experience of lead researcher Bruce Hellinga. 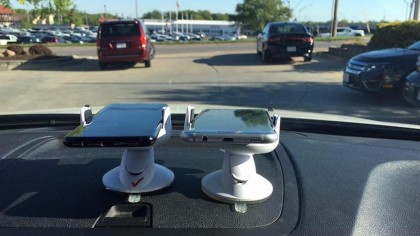 "I got frustrated by what I perceived as vehicles getting too close to me," Hellinga said. "You feel very vulnerable when a vehicle comes within what feels like mere centimeters."

How to get people into cycling has been a challenge for many cities around the world. There are many different factors involved ranging from local climate conditions, changing facilities in office to helmet laws.

However urban design continues to play a hugely important role. As cities transition away from large numbers of privately owned passenger cars towards models of shared electric vehicles and more efficient public transport, it is likely that urban areas will also begin to transform into more bike-friendly places.

The Brain Can Detect Touch through Tools, Confirms New Research