MIT has been working to make solar power more efficient and sustainable for some time now, in fact, not too long ago a research team developed a method of stacking solar cells that would almost double their capture efficiency. Now, a team of engineers at MIT have overcome the limit that was thought to forever define how much energy you could capture from the Sun, the Shockley-Queisser Limit. This Limit essentially states that there is a cap on the amount of power that can be collected by a solar cell due to the wide range of light frequencies, which is around 32 percent, according to Gizmodo. The new solar cells were designed to convert the excess heat energy from the sun into light energy that can be reabsorbed by the solar cell. Ultimately this increases the efficiency of the cells far fast the 32 percent limit, and it could change the green energy industry. 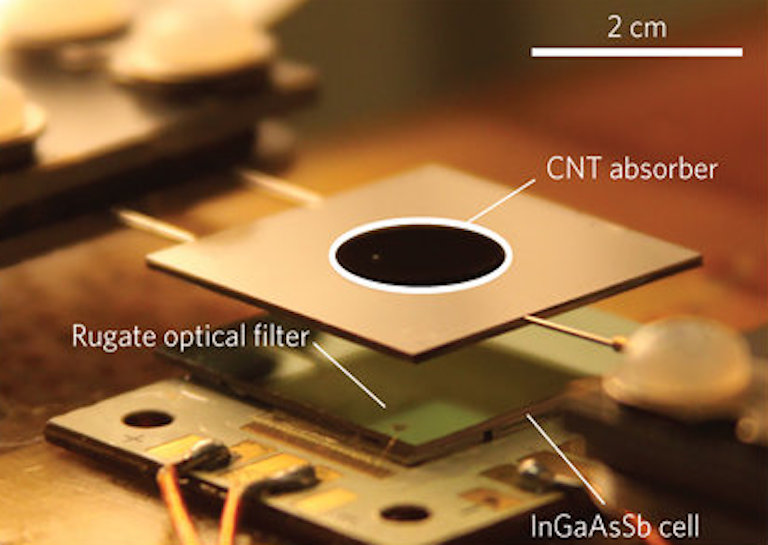 The solar cell system is made up of nanophotonic crystals, which are special crystals that emit usable forms of light radiation when heated. These devices are at the core of this new technology.

"Solar thermophotovoltaic devices have the potential to enhance the performance of solar energy harvesting by converting broadband sunlight to narrow-band thermal radiation tuned for a photovoltaic cell. A direct comparison of the operation of a photovoltaic with and without a spectral converter is the most critical indicator of the promise of this technology." ~ Nature

Surpassing the Shockley–Queisser limit is a big deal, and it could mean more effective solar farms, and perhaps a more sustainable solar based energy grid. The research team did a lot of testing on their devices and determined the following:

"The device operates more efficiently while reducing the heat generation rates in the photovoltaic cell by a factor of two at matching output power densities." ~ Nature

Above, you can see some of the set up for the new solar cell with the thermal emitter functioning as the nanophotonic crystal which converts heat into usable photons. If you are interested in learning more about this technology, you can read their findings in the scientific paper published here. The biggest challenge to furthering this collection and conversion method is scaling the technology up. With a little more research, this will likely become viable, and the meaning of "efficient solar" will change forever.