Researchers have come up with a way to create graphene from soybeans, a method cheaper and quicker than the ones known. This could also make the world’s strongest material more commercially viable.

Australian scientists have been able to create clean water with a new filter made from soybean-based graphene film.

This new filter is very effective and it can even make the dirtiest water drinkable, according to experts. It is also simpler, cheaper and more environmentally-friendly than other known methods.

The filter is called Graphair and is made from a graphene film with microscopic channels that trap pollutants while letting clean water through.

Scientists at the Commonwealth Scientific and Industrial Research Organisation (CSIRO) also developed a graphene-based film which is cheaper and more environmentally-friendly than typical graphene.

This could have positive implications for the 2.1 billion people who are known not to have access to clean, safe drinking water. Researchers have even used the system on the water in the Sydney Harbor, saying it came out clean enough to drink.

The issue with other filtration systems is that they can get clogged with chemical and oil-based pollutants, which must be removed before the filtering can even start. With just four tools, which are heat, Graphair, a membrane filter and a water pump, the water can simply be run through a filter and the task is accomplished.

Unlike other filters, Graphair does not require a series of steps to get water clean.

Graphene is a carbon material that is only one atom thick. Its thin composition and high conductivity mean it can be used in applications ranging from miniaturized electronics to biomedical devices, CSIRO said on its website.

Until now, the high cost of graphene production has been the major obstacle in its commercialization. Previously, graphene was grown in a highly-controlled environment with explosive compressed gases, which required long hours of operation at high temperatures and extensive vacuum processing.

Production made faster and simpler

CSIRO scientists have been able to develop a novel “GraphAir” technology which eliminates the need for a highly-controlled environment. The technology can grow graphene film in ambient air with a natural precursor, making its production faster and simpler.

“Our GraphAir technology results in good and transformable graphene properties, comparable to graphene made by conventional methods,” CSIRO scientist and co-author of the study Dr Dong Han Seo said.

Soybean oil breaks down with heat into a range of carbon building units that are essential for the synthesis of graphene. 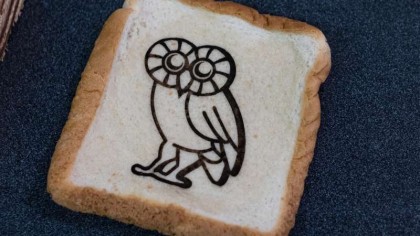 “This ambient-air process for graphene fabrication is fast, simple, safe, potentially scalable, and integration-friendly,” CSIRO scientist Dr. Zhao Jun Han, co-author of the paper published in Nature Communications said. “Our unique technology is expected to reduce the cost of graphene production and improve the uptake in new applications.”

The team has also been able to transform other types of renewable and even waste oil, such as those leftover from barbecues or cooking, into graphene films.

“We can now recycle waste oils that would have otherwise been discarded and transform them into something useful,” Dr. Seo said.

Could a Real-life Stillsuit Keep Us Alive on a Desert World?