New papers use loop quantum theory to extend gravitational physics beyond Einstein's theory of general relativity in relation to the singularity of black holes.

The physics that exist close to the center of a black hole are being made possible to examine using the theory called "loop quantum gravity". The theory uses quantum mechanics to extend gravitational physics beyond Einstein's theory of general relativity.

It originated at Penn State and has been adopted by scientists all over the world to explore new paradigms in modern physics. It is considered to be the best way to analyze extreme cosmological and astrophysical phenomena in parts of the universe, such as black holes.

Two new papers do exactly this. Abhay Ashtekar and Javier Olmedo at Penn State and Parampreet Singh at Louisiana State University have published papers that extend on the work done which used loop quantum gravity to analyze the quantum nature of the Big Bang.

The new papers extend those results to black hole interiors. "The best theory of gravity that we have today is general relativity, but it has limitations," said Ashtekar, Evan Pugh Professor of Physics, holder of the Eberly Family Chair in Physics, and director of the Penn State Institute for Gravitation and the Cosmos.

"For example, general relativity predicts that there are places in the universe where gravity becomes infinite and space-time simply ends. We refer to these places as 'singularities.' But even Einstein agreed that this limitation of general relativity results from the fact that it ignores quantum mechanics."

The singularity can be understood as the result of the space-time being so curved at the center of a black hole, that, according to general relativity space-time becomes curved and then ultimately infinite. 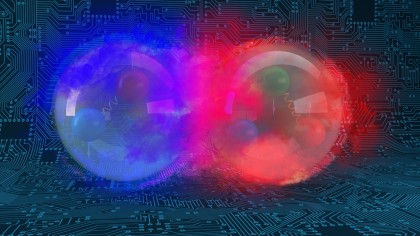 The Most Misunderstood Theories in Physics - Explained

This then results in space-time having a jagged edge, beyond this edge physics no longer exists and this is known as the singularity.

The Big Bang is another example of singularity. Under the frame of general reality, it is impossible to ask what happened before the Big Bang because space-time ends, and there is no before.

Similar modifications that incorporated quantum mechanics through loop quantum gravity has allowed the authors of the new papers to make new predictions for the black hole singularity.

“The basis of loop quantum gravity is Einstein’s discovery that the geometry of space-time is not just a stage on which cosmological events are acted out, but it is itself a physical entity that can be bent,”said Ashtekar.

“As a physical entity, the geometry of space-time is made up of some fundamental units, just as matter is made up of atoms. These units of geometry — called ‘quantum excitations’ — are orders of magnitude smaller than we can detect with today’s technology, but we have precise quantum equations that predict their behavior, and one of the best places to look for their effects is at the center of a black hole.”

Black Holes 101: What Exactly Are They

Scientists Make Breakthrough Study on the Birth of Black Holes