As robots and humans start to share workplaces, this research reveals the complicated dynamics that arise.

Robots are quickly becoming ever more present sneaking up in all areas of life. Some have even come to fear them stating there is a robocalypse on the way.

SEE ALSO: 11 SCI-FI ROBOTS THAT MIGHT ACTUALLY WORK IF WE BUILT THEM

Although that seems far fetched, and so far robots have mostly been helpful, there are areas where robots are rather unwelcome. A new study by Cornell University has found that people do not like to be beaten by robots in contests for cash prizes.

A competition with robots

The study further found that it made people feel less competent, expend less effort at trying to win and also made them dislike the robots. This is natural if you think that robots' superior abilities for certain tasks can simply not be beaten.

Loss aversion dictates that people will not try as hard when their competitors are doing better. In the case of the robots, there is also the fact that these machines are programmed to be far better at certain tasks leading to a clear advantage over humans.

The study saw humans compete against a robot in a tedious but precise task. They both had to count the number of times the letter G appeared in a string of characters.

The experiment also had a screen indicating their chances of winning at each moment. After each round, participants rated the robot's competence, their own competence, and the robot's likability.

The study revealed that the better the robot performed better, the lower the participants rated its likability and their own competence. The study is meant to look at how workplaces might optimize teams of people and robots working together to avoid such negative outcomes. 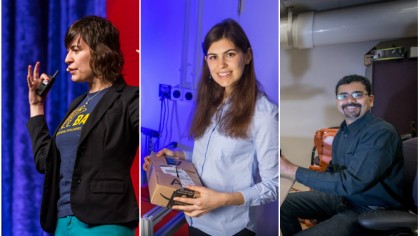 "Humans and machines already share many workplaces, sometimes working on similar or even identical tasks," said Guy Hoffman, assistant professor in the Sibley School of Mechanical and Aerospace Engineering. Hoffman and Ori Heffetz, associate professor of economics in the Samuel Curtis Johnson Graduate School of Management, are senior authors of the study.

"Think about a cashier working side-by-side with an automatic check-out machine, or someone operating a forklift in a warehouse which also employs delivery robots driving right next to them," Hoffman said.

"While it may be tempting to design such robots for optimal productivity, engineers and managers need to take into consideration how the robots' performance may affect the human workers' effort and attitudes toward the robot and even toward themselves. Our research is the first that specifically sheds light on these effects."