Getting the right nutrients now could play a major role in your cognitive performance as you age.

As you get older, your brain ages with you; this is inevitable. Containing, well over 100 billion interconnected neurons the brain is an impressive product of evolution, however after a certain age your brain loses some of its mojos. Researchers are constantly working to better understand how the brain ages.

You might not be able to reverse the brain aging but there are nutritional steps that can be taken now to preserve your cognitive ability. Reported in the scientific journal NeuroImage, University of Illinois researchers have linked higher levels of certain nutrients to more efficient cognitive connectivity and performance.

Looking at 32 key nutrients found in the Mediterranean diet, a diet that has been proven to help brain function, the research team studies 116 healthy adults 65-75 years of age to see if diet and nutrition do in fact predict cognitive function.

For the uninitiated, the Mediterranean diet is associated with reduced incidence of cancer, and Parkinson's and Alzheimer's diseases. The diet itself centers around eating plant-based foods, lots of healthy fats, fresh herbs and moderate amounts of fish, wine and with a moderate amount of exercise.

The study showcase that a handful of nutrient biomarkers in the blood are associated with brain health and cognition. All widely abundant in the Mediterranean diet, things like omega-3 fatty acids, alpha- and beta-carotenoids, and vitamins B and D are all crucial components to those who performed better in the cognitive study.

The way the team conducted the study was a little different than you may expect. Researchers looked for patterns of nutrient "biomarkers" in the blood of the participants and paired that with magnetic resonance imaging (MRI tech) to examine the efficiency of certain networks in the brain. 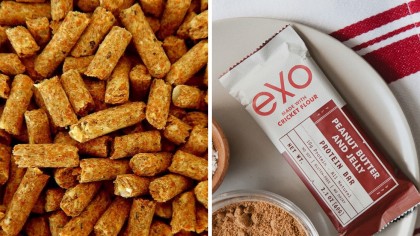 Should We Be Eating Bugs?

As stated by the research lead Professor Aron Barbey, "The basic question we were asking was whether diet and nutrition are associated with healthy brain aging. And instead of inferring brain health from a cognitive test, we directly examined the brain using high-resolution brain imaging."

Participants in the study who had higher amounts of omega-3 and omega-6 fatty acids, carotenoids, lycopene, riboflavin, folate, vitamin B12, and vitamin D showcased more efficiency in different brain networks.

Nevertheless, though this study points to the importance of a good diet, do not be afraid to treat yourself this holiday season.