Two Harvard astrophysicists predict that we could see a solar flare within the next 100 years and propose a solution for saving our technology from critical damage.

As humanity becomes more technologically dependent, solar flares become an even greater threat. In 1859, a solar flare known as the Carrington Event caused an electrical surge that shut down global telegraph systems. Now, two researchers from Harvard theorize that the next big solar flare is coming within the next 100 years. Given how much technology we rely on every day, that flare would devastate most of the globe.

The paper appeared in The Astrophysical Journal and was written by Harvard professor Avi Loeb and postdoc candidate Manasvi Lingam. The men set out to calculate precisely how much damage could occur by the time of the next solar flare.

"The vulnerable phase is during the relatively short-lived regime of exponential amplification that is likely to begin a few decades henceforth," they wrote. "The ideal scenario entails the identification and implementation of an effective strategy to mitigate the risks from extreme space weather events within the next century."

They used geological records and paired that with data from observations of other Sun-like stars. They then calculated the frequencies of various solar flare sizes and ultimately the frequencies in which a superflare could impact Earth. While extinction-level superflares happen ever 20 million years by their calculations, weaker flares able to wipe out technological damage is significantly more likely.

The new study pointed out that "the most powerful superflares can serve as plausible drivers of extinction events," and that "the risk posed by superflares has not been sufficiently appreciated."

(You can appreciate solar flares more in the video from NASA below.)

However, the researchers offered up a unique solution. They proposed that a huge magnetic shield surrounding Earth could effectively protect it from a solar flare.

"It seems reasonable to conclude that technologically advanced civilizations on planets orbiting these stars would be well aware of the economic and biological risks posed by flares and superflares," they said. "In order to mitigate the damage wrought by extreme space weather events, it is very conceivable that they would adopt shielding strategies against such phenomena.… [This would] necessitate large-scale engineering projects that may be detectable by future observations."

They noted that the shield could deflect the charged particles that would damage technology. 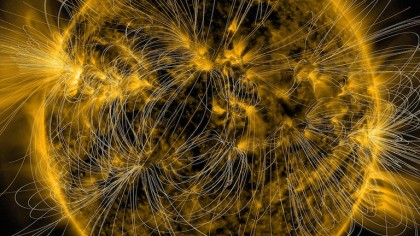 New Time-Lapse of Solar Flares and Eruptions Released by Nasa

Before engineers started freaking out over the specifications and logistics of the duo's proposal, Loeb and Lingam recognized that the challenges currently outweighed the feasibility right now. The biggest issue would be maintaining a current to the magnetic shield itself. However, the two did say it's economically feasible given their estimates. They proposed that a 105-ton shield could cost $100 billion. That's roughly the same cost as the International Space Station.

"...and [that cost] is three to four orders of magnitude lower than the current world GDP, or the economic damage from a flare around 100 years henceforth," the researchers continued.

In addition to impacting life on Earth, solar flares would also impact the quest for finding extraterrestrial life, Lingam and Loeb noted. They said that advanced alien civilizations would experience similar technological disruptions if they held the same level of intelligence and technological reliance as humanity.