New Study Shows the Moon Used to Have an Atmosphere

Scientists have discovered that the Moon once had an atmosphere. The discovery has big implications for lunar exploration.

Scientists have discovered that the Earth’s moon had an atmosphere roughly three to four billion years ago. David Kring, from the Universities Space Research Association (USRA) explains what this means: "This work dramatically changes our view of the Moon from an airless rocky body to one that used to be surrounded by an atmosphere more prevalent than that surrounding Mars today."

The atmosphere existed at a time when volcanic eruptions of the moon emitted gases too quickly for them to be absorbed into space. The scientists made the discovery by analyzing moon rock samples brought back by astronauts from the Apollo missions. Analysis showed that the moon's lava flows contained carbon monoxide and other gas components, sulfur, and even the basics of water. 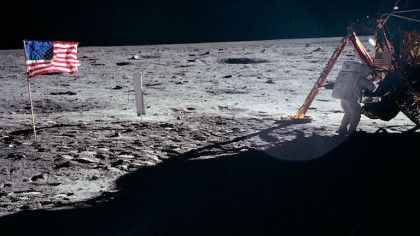 The samples were used to calculate how much gas was rising from the lava and collecting in the temporary atmosphere. The analysis showed the volcanic activity was at its most fierce about 3.5 billion years ago. The atmosphere lasted for roughly 70 million years before it was lost again. During the time the moon did have this atmosphere it was also orbiting much closer to earth. The moon would have looked much larger if there had of been anyone on earth to witness it.

The new understanding of our moon's atmospheric history has some consequences for future planned space exploration. The more nuanced understanding of our moon suggests that there are volatile particles left over from the moon's atmosphere that may be trapped on the moon's surface in its cold and shadowed areas. If this is true, it could mean that there is the potential source of ice that could then be used to sustain human life, agriculture and other needs.

The next astronauts expected to touch down on the moon may be part of the Google Lunar XPRIZE. The international competition was announced at the Wired Nextfest on 13 September 2007, offering more than US$30 million in prizes to a team that can land a robot on the Moon, travel more than 500 meters and transmit back high-definition images and video. Additional prizes are offered for extra tasks that the teams can complete such as collecting rocks samples, photographing evidence of Apollo or bring back proof of potential water sources. There are currently several teams still in the running for the prize, they have until mid next year to complete their missions. One other additional prize will be awarded to the team that can prove they made significant advances in the promotion of diversity in the STEM fields.