A team of researchers figured out a new way to distort sound waves in order to hide large objects like submarines.

A team of French researchers has stumbled upon a new way to render an object invisible using sound waves. The system strategically places acoustic relays so that sound waves can build up at a constant amplitude -- regardless of what's in their path.

When waves come into contact wiht naturally occurring materials, they bounce and disperse. This causes the energy from those waves to dissipate in what the researchers noted was a highly complex interference pattern. This makes the sound waves less intense as they move away from the object. The team from Ecole Polytechnique Fédérale de Lausanne (EPFL) noted it's impossible to send data or energy through wave-scattering media and also "leverage the potential of wave technology". 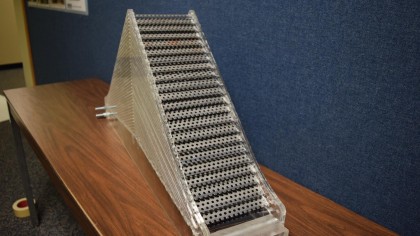 Take an average smartphone, for example. Any sort to of geolocation or GPS functionality (even on the best phones) doesn't work well inside buildings. That's because the radiofrequency waves scatter in all directions after hitting walls. The EPFL School of Engineering collaborated with TU Wien and the University of Crete to develop a way around that common headache. Additionally, by offsetting wave scattering, the team said it could render certain objects 'invisible.'

They created a system of tiny speakers that work as acoustic relays to offset the wave scattering. The speakers can be controlled to amplify, attenuate or shift the phase of the sound waves. This gives researchers the ability to offset the diffusion that results when the waves hit obstacles and reproduces the original sound on the other side of the obstacle.

"We realized that our acoustic relays had to be able to change the waves' amplitudes and phases at strategic locations, to either magnify or attenuate them."

"We realized that our acoustic relays had to be able to change the waves' amplitudes and phases at strategic locations, to either magnify or attenuate them," said Romain Fleury, head of EPFL's Laboratory of Wave Engineering (LWE) and a co-author of the study.

"We've been working on using controlled speakers as active sound absorbers for years, so it made sense to use them for this new application too," said Hervé Lissek, head of the acoustics research group at EPFL's Signal Processing Laboratory 2 (LTS2) and a co-author of the study.

"Until now, we only needed to attenuate sound waves. But here we had to develop a new control mechanism so we could also amplify them, like how we can already amplify optical waves with lasers," added Etienne Rivet, another co-author at EPFL who wrote a thesis on the subject.

This technology has been something research teams around the world have been working toward in recent years. It could become one of the most effective ways to hide submarines, the EPFL team noted. It would be able ot eliminate the waves that bounce off of subs, thus giving them better chances of going undetected by sonar readings. On a smaller scale of applications, the researchers' findings could help remove annoying ambient sounds in large cities.