A new type of fake nervous system would give prosthetic wearers an ability to feel their surroundings despite the prosthetic's material.

Prosthetics have rapidly improved in recent years thanks to technologies like 3D printing and more responsive robotics systems. However, an international team of researchers might have a way to give prosthetics an entirely different feel -- literally. A team from Stanford University have developed a new style of artificial nerve that can process information similar to the human body.

For the researchers from Stanford and Seoul National University, this means that their artificial nervous system could activate the twitch reflex of a cockroach and even identify Braille letters.

"We take skin for granted but it’s a complex sensing, signaling and decision-making system," said Zhenan Bao, a professor of chemical engineering and one of the senior authors. "This artificial sensory nerve system is a step toward making skin-like sensory neural networks for all sorts of applications."

There have been hundreds of innovations in prosthetics in recent years. For example, amputees can now control their arm movement using their thoughts alone. Other types of limbs have pressure sensors to help control a user's grip in a more natural way. However, those upgrades have consistently missed out on just how intricate the human nervous system is. The research team wanted to replicate the vast network that allows to much information to travel through our bodies to our brains and back.

Bao and her team created their unique sensory nerve to replicate how the human nervous system functions. The team used organic compounds that had three parts. The first part held dozens of sensors to pick up on various pressure cues. By pressing on a sensor, there was an increased voltage between two electrodes. That change in voltage gets picked up by the second piece of the synthetic system. The team used a ring oscillator to convert the changes in voltage into electrical pulses. Those pulses then go to a synaptic transistor. That transistor puts forth pulses that match the ones coming from biological neurons.

This project comes as a part of Bao's larger journey to mimic how the skin stretches, heals itself, and acts as a massive sensory network that can both send pleasant feelings to the brain but also trigger quick decisions.

A paper detailing the nervous system was published in a recent edition of Science.

Seol National University professor Tae-Woo Lee is responsible for the synaptic transistor. Lee spent his sabbatical helping Bao in her Stanford lab in order to help the project. 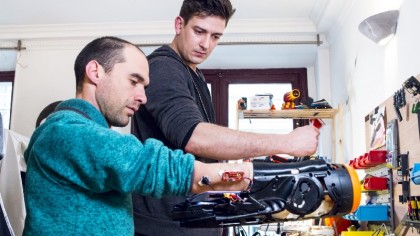 "Biological synapses can relay signals, and also store information to make simple decisions," said Lee, who was a second senior author on the paper. "The synaptic transistor performs these functions in the artificial nerve circuit."

According to the team, Lee used a knee reflex in order to show how advanced this technology could become should it be paired with prosthetic devices. Lee used the knee for an example because when the body gets a tap on the knee (like the excruciating experience of running one's knee into furniture), the muscles send a neuron which then sends out signals to synapses. The network can then recognize a pattern and cause the knee to both contract quickly and a less urgent signal to send that sensation to the brain.

The researchers hope to bring artificial nerve technology farther than it's ever been before. The team also wants to create low-power artificial sensor nets for robotics in order to improve their agility and actions.