A new technique can identify the unintended effects of CRISPR gene-editing.

Medical researchers believe they have found a technique that will allow doctors and researchers to identify the off-target effects of specific gene-edits made by CRISPR/Cas9, potentially speeding up the development of new gene therapies for major diseases.

CRISPR/Cas9 is an incredibly powerful gene-editing tool comparable to a set of scissors that can snip out specific sections of a DNA strand and replace it with a preprogrammed alteration. The technique holds the potential to treat all kinds of ailments, known and unknown, but the move from the laboratory to medical trials has been slow.

This is mainly because even though CRISPR is precise, it is not perfect. Given a pair of scissors and asked to cut out a square off the corner of a piece of paper that is about 1 square inch and you can usually do it, but as anyone who has ever had to wrap a present can tell you, cutting exactly where you want to cut isn’t always easy.

The problem is that the implications of cutting out DNA and replacing it are much more dire than wrapping a present in an aesthetically pleasing way. If you don’t cut a straight line in the wrapping paper, it isn’t the end of the world. Make unintended alterations to a cell’s DNA, and you may well cure the disease you were hoping to treat, but now you may have created another one that will become symptomatic many years down the road, and that could be far deadlier.

There’s no telling what an unintended alteration may do, especially if you don’t know where, or even if, it occurred.

Because of this consideration, identifying areas that have been edited unintentionally is vital so that those areas may be restored if possible, and if not, the researchers can tweak their technique to eliminate the offending edit in the next cell, or if all else fails, they can try another approach.

Until now, there hasn’t been a safe and effective way to know where these areas might be, but researchers at the Gladstone Institutes and the Innovative Genomics Institute (IGI), along with researchers from the pharmaceutical giant AstraZeneca, report that they have found a way to track unintended alterations made by CRISPR/Cas9.

In a new study published last week in the journal Science, the researchers showed how to locate these unintended off-target effects produced in DNA by the CRISPR/Cas9 process by looking for the emergency responders sent out by the cell to repair the damaged sections of DNA.

A cell, much like a city’s emergency services dispatcher, has several responders they can send out depending on a given situation, and the presence of one kind of responder on the scene gives you a clue as to what the emergency is.

"When CRISPR makes a cut, the DNA is broken," said Beeke Wienert, Ph.D., a postdoctoral scholar in Bruce R. Conklin's laboratory at Gladstone who began the work while part of Jacob E. Corn's IGI laboratory. "So, in order to survive, the cell recruits many different DNA repair factors to that particular site in the genome to fix the break and join the cut ends back together.

“We thought that if we could find the locations of these DNA repair factors, we could identify the sites that have been cut by CRISPR."

While an intuitive solution to the problem, researchers had to test it to see if it would work. 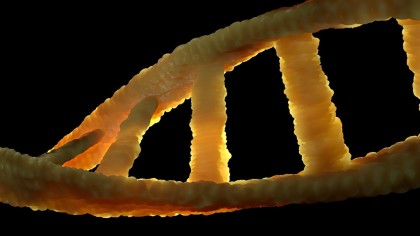 The best way to do that was to look at the entire profile of DNA repair factors that might respond to a call to repair damaged DNA and find the one most likely to respond quickly to that kind of call. They were able to then identify the repair factor they were looking for, MRE11 who was always one of the first factors to respond to their edits. Of all the first responders you might encounter, Fire department, police, etc, you'll find all of them at all kinds of emergencies performing different functions; whenever you see that the first to arrive is the paramedic though, you know that there is a medical emergency.

In the case of unintentionally damaged DNA sequences, MRE11 is the cell’s version of the medic with a defibrillator. Using MRE11, the researchers were able to develop a technique they call DISCOVER-Seq that can find along the length of the DNA strand and look for sites where MRE11 was found.

"The human genome is extremely large—if you printed the entire DNA sequence, you would end up with a novel as tall as a 16-story building," explains Bruce R. Conklin, MD, Gladstone's senior investigator, and the deputy director at IGI. "When we want to cut DNA with CRISPR, it's like we're trying to remove one specific word on a particular page in that novel."

"You can think of the DNA repair factors as different types of bookmarks added to the book," he added. "While some may bookmark an entire chapter, MRE11 is a bookmark that drills down to the exact letter than has been changed."

DISCOVER-Seq isn’t the first attempt to locate off-target gene-edits. The problem with other methods though is that they have potentially negative consequences of their own. The attempt to locate the unintentional changes can possibly kill the cell whose DNA you are trying to repair. There is also the practical consideration that all of these techniques are performed on cultured cells in a laboratory, ruling out their use in patient-derived stem cells.

"Because our method relies on the cell's natural repair process to identify cuts, it has proven to be much less invasive and much more reliable," says Jacob E. Corn, Ph.D., formerly of the Innovative Genomics Institute, but who now runs a laboratory at ETH Zurich.

"We were able to test our new DISCOVER-Seq method in induced pluripotent stem cells, patient cells, and mice, and our findings indicate that this method could potentially be used in any system, rather than just in the lab."