A new thorium salt reactor is currently under development in the Netherlands, the first of its kind in decades. If all goes as planned, the plant could have enormous impacts in terms of environmentally cleaner energy production and nuclear waste disposal. International governments are eagerly monitoring progress at the research facility.

Recent work on a Thorium fission generator involving the testing of nuclear fission through the use of thorium salts brings with it a fresh wave of research on Molten Salt Reactors (MSRs), the key component in thorium-based nuclear energy production. The research for the work is being carried out at the Netherlands-based Nuclear Research and Consultancy Group in the town of Petten. Although there is a very healthy and active amount of discussion and experimental research on MSR use in many countries in the world, this would be the first case of an active reactor in decades.

What makes a thorium reactor different from the traditional nuclear reactor is the use of liquid fuel (in liquid thorium fuel reactors, a type of MSR), the thorium cycle eliminating the need for the fabrication and handling of solid used fuel in reactors. “The use of the Th-U fuel cycle is of particular interest to the MSR, because this reactor is the only one in which the Pa-233 can be stored in a hold-up tank to let it decay to U-233.” This spells out greater efficiency in the energy production process as well as improvements in waste removal and disposal.

The Story Behind Thorium-based Reactors

In the two decades leading up to the closure of the Tennessee-based Oak Ridge Thorium Plant roughly forty years ago—research into this alternative had begun during the post-war years—there was strong momentum building within the scientific community about the benefits of thorium as a source of energy production, as well as its expansion. As with many energy debates, there was strong disagreement among scientists and government about its effectiveness and feasibility.

The work of creating viable clean and renewable energy options is a topic on everyone’s mind, and the development of plants of this type will definitely add a new dynamic to the debate. Within the last two years, U.S.-based Martingale, for instance, unveiled its ThorCon liquid fuel reactor design, “targeting its first installations in forward-looking countries that support technology-neutral nuclear regulations and see the benefits of the license-by-test process.”

Also, with environmental activists strongly staking their claim in the same debate about sustainable energy and the environment—when the 21st century began, it appeared to many that nuclear power planets were being phased out—more questions will still need to be answered about whether Thorium-derived nuclear energy will prove to be the cleaner energy resource it purports to be. 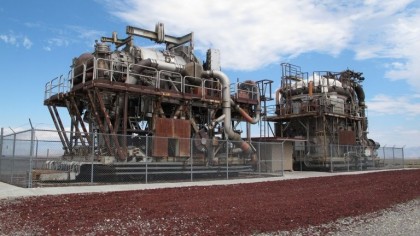 Take a Look Inside the World's First Nuclear Power Plant