Each year, the United States produces around 4 trillion kilowatt hours of electricity, 90 percent of which is produced using thermal power plants - plants which convert heat into electric power.

A New Vapor Catching System: How to Save Billions of Gallons of Water Per Year

The solution MIT researchers devised to solve the water-wasting crisis is remarkably simple: They discovered by zapping fog with a beam of electrically charged particles (known as ions), the water droplets suddenly become electrically charged, subsequently forcing the droplets to become attracted to the mesh.

How Much Water is Used to Make Electricity

It is a vital process in power generation but results in the loss of hundreds of billions of clean water each year due to evaporation. According to IEEE Spectrum, leaving a 60-watt light on for 12 hours can consume as much as 60 liters of water. 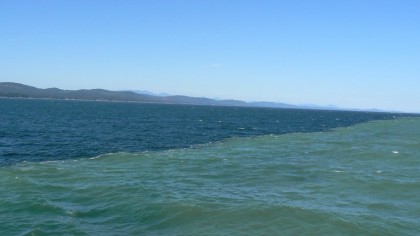 In fact, 39 percent of all freshwater extracted from all the rivers, lakes, and reservoirs in the US is dedicated to serving all the cooling needs of the thermal power plants that use fossil fuel or nuclear power. Unfortunately, much of it is lost to evaporation as it floats away into the atmosphere.

The losses are significant, but a new system proposed by MIT researchers could recapture a significant portion of that lost water. The reclaimed water can be reused in the plant or can become a major source of potable fresh water for coastal cities who use seawater to cool their thermal power plants.

The idea to build such a device was born out of Varanasi’s vision of developing a highly efficient water recovery system designed to recapture water droplets from both natural fog and plumes of vapor from industrial cooling towers.

Varanasi aimed to improve the current inefficiencies in capturing water droplets from vapor. Other previous systems are typically comprised of plastic or metal mesh which is hung vertically in areas with high vapor concentrations. They are also horribly inefficient, only able to collect 1 - 3 percent of water vapor from cooling towers. As vapor passes over the gate, some of it hits the surface of the mesh where it collects until it drips down into a collection pan.

Most vapor collection devices suffer from the aerodynamics of the system. The mesh in the gates acts as flow barrier, forcing air to deviate around the fog-collecting screen. MIT describes much like the way an airplane wing splits the airflow air it travels above or below the wing.

In the image above, the water is untreated and the mesh is not charged. It can be seen that a majority of the vapor travels between the holes in the mesh.

It was Varanasi's determination and careful experimentation which led her to discover a far greater solution. By simply zapping the water droplets with an ion beam and inducing a voltage through the mesh, the water molecules no longer deviate around the wires, but rather head directly towards them. Even water molecules directed towards the holes in the mesh were redirected onto a collision course with the wire. Effectively, the water droplets could overcome the aerodynamic forces which previously drove them the mesh.

In a 30 minute trial, researchers were able to collect 30 ml of water with the electrically charged mesh while the mesh without a voltage produced a measly three drops of water.

The water which is harvested is already quite pure, and researchers say it is a massive wasted resource.

According to MIT, power plant operators tend to be rather conservative when it comes to adopting new technologies. The companies are not necessarily interested in potential solutions and rather stick to already proven technologies. If not employed elsewhere, power plants will not typically adopt technologies which have not yet been proven on an industrial scale.

To reassure companies with evidence that the system does in fact work, MIT is installing a full-scale test version of their water-recapture device on top of their cooling tower of their Central Utility Plant, a natural-gas cogeneration power plant currently providing most of the campus’ electricity, heating, and cooling needs.

By leading through example, MIT is “de-risking” the technology by implementing it themselves to prove how efficient the device is, provoking companies to consider the new tech.

The technology is simple and efficient. It is easily integrated into power stations without requiring major modifications. At the moment, the team of MIT engineers are installing the device which is expected to in place by the end of the summer.

The vapor catching device will enable thermoelectric power plants to save countless billions of gallons of water, reducing operational cost and increasing efficiency while reducing the heavy toll of water waste is putting on some regions of the world.