These thin medical sensors could help doctors better monitor some of their most vulnerable patients.

An international team of researchers have created a novel way to collect vital information about bedridden patients. The team developed small, skin-like sensors that can be attached to a patient and collect anything from temperature to pressure. That information is then quickly sent wirelessly to healthcare workers, giving medical professionals an easier and more effective way to track changes in their patients.

Gathering this data is particularly important for bedridden patients. In hospital settings, constantly checking temperature is one of the first ways doctors can identify a potential infection. Fevers are a tell-tale sign of something going wrong.

Testing a bed-ridden patient's pressure can also quickly tell caretakers when someone needs to be moved around to prevent from bedsores. Those can be incredibly painful and even deadly; it's estimated that nearly 60,000 Americans die each year from pressure ulcer-related complications. They also negatively affect someone's quality of life and lead to a host of psychological stress, according to additional studies. Current tests for pressure ulcers are often painful and normally involve probes.

This new sensor wants to make gathering these two critical data points easy and streamlined. The sensors aren't meant to be used individually; they come as part of a set. The researchers said the sensors would be applied to various places on the skin -- up to 65 sensors depending on a patient's size. Given the flexible and thin nature of the wireless sensors, they can easily form to the skin. 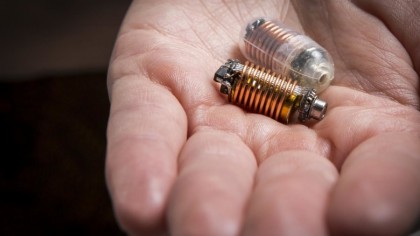 These Ingestible Sensors Can Track the Gases In Your Gut

Once the information is collected, that device then relays the data to a computer which monitors the data and sends out alerts to healthcare providers.

The team -- which includes researchers from the United States, China, and Korea -- already tested the sensors against more conventional ways of monitoring patients. Their reports noted an improved effectiveness, but they have a larger clinical trial being planned. The team stated in a press release that they want to add other capabilities to the sensors to give doctors a better understanding of their patient's well-being. They want to include ways to collect data about heart rate and breathing rates.

What Data are Voice Assistants Collecting and How to Protect Yourself

AI Used to Measure Sugar in the Blood