The new observations, a result of 13 years of work, prove the presence of a massive black hole at our galaxy's center.

By  Jessica Miley
Nov 24, 2018
The central region of our Milky Way galaxy in infrared NASA/JPL-Caltech/ESA/CXC/STScI

New exciting research has detected the presence of visual hotspots or flares circling the Milky Way’s central black hole, after 13 years of observations.

The incredible discovery, a collaborative work between astronomists from across the globe, has led to a better understanding of the behavior of the hole also known as Sagittarius A*. It is also allowing astronomers to better ‘see’ the accretion disk, the growing mass of orbiting gas and debris that surround Sagittarius A*.

Milky Way brightens up each day

The latest findings build on previous research that examined the center of the Milky Way in near-infrared. The examination revealed the Milky way doesn’t produce even light but actually brightens each day for about for about 30 or 40 minutes.

Avery Broderick along with Avi Loeb from the Harvard-Smithsonian Center for Astrophysics hypothesized this brightening also known as the bright infrared flare was the result of a massive central black hole.

Their theory was supported by evidence of a bright group of stars known as a nuclear star cluster surrounding the dark central region of the Milky Way.

Wobbling light helps prove the existence of a black hole

Infrared observations on stars at the very center of the Milky Way showed that they orbit a dark object estimated to be 4 million solar masses in size, once again suggesting the likely presence of a black hole.

Despite this strong evidence, to actually prove the presence of a black hole was not possible until now.

The light from the recently spotted flares central Milky Way flares is warped by the gravity of the black hole in a phenomenon called gravitational lensing.

"The black hole acts like the lens of a lighthouse. [There is] a localized emission region, but it's not the sudden brightening of the emission region itself that causes the flare," Broderick said.

Rather, the gravity of the black hole bends the light from the emission and magnifies it for us to see.

"That's what's responsible for the flaring — the manifestation of extreme gravity." Broderick and Loeb understood that the objects they wanted to examine in the accretion disk surrounding Sagittarius A* would have a ‘wobble’ in the infrared emissions due to their orbital motion around the black hole. 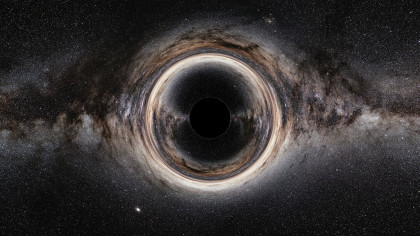 Black Holes Are the Terrifying Behemoths of Space. Here's How They Tick

The two researchers discussed this likelihood in papers published in 2005 and 2006, but weren’t able to prove their theory due to a gap in technological resources available.

That gap was filled by the launch of the GRAVITY instrument on the European Southern Observatory's Very Large Telescope in 2016.

The highest level of sensitivity and precision in the telescope allowed the scientist to detect the wobble in the flares in the Accretion disk circling Sagittarius A*.

"While flares have been seen for a long time now … the key finding here is the characteristic wobble of the flares," which indicates that the material producing these flares is moving around a black hole, Broderick said.

Their findings were published Oct. 18 in the journal Astronomy & Astrophysics.