Tesla’s next-generation Roadster delighted fans and Tesla employees alike when it was spotted at the Hawthorne Delivery Centre last weekend. The next generation Roadster, which Tesla CEO Elon Musk has said will be a ‘hardcore smackdown to gasoline cars’ was spotted by Tesla reservation holders as they waited to pick up their cars on Sunday.

The full operational prototype Roadster was the same car used to film the recent segment of Jay Leno’s Garage where the famed TV host interviewed Tesla Chief Designer Franz von Holzhausen. It was the same car that was used to originally launch the Roadster.

Are you lucky enough to be picking your Tesla up at Hawthorne CA today? If so check out this #NextGenRoadster on display, and may be Elon or Franz will help deliver your car! Pics courtesy of Carlos R. pic.twitter.com/Kp1gbDp4mz

Roadster to hit streets in 2020

The dramatic unveiling of the Roadster saw it emerge from the back of a Tesla Semi during a big Tesla media event last year. European Tesla fans who were lucky enough to be at the Grand Basel Auto Show in Switzerland in September got a glimpse of the Roadster, albeit a non-functioning 1:1 model. Painted in white, the model Tesla looked at home among the world's most elite cars.

The Tesla Roadster won’t be produced in mass quantities like the Model 3 but the all-electric sports car is still likely to make a splash in the market when it eventually gets there.

Buyers in Europe who have the choice between top car brands might be tempted by the high performing Tesla purely on price point. 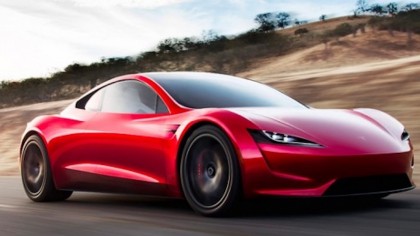 While cheaper, the Tesla Roadster is likely to be equal or outperform these cars sitting closer to million dollar cars like the McLaren P1 and the Ferrari LaFerrari.

Tesla has said the Roadster would be able to hit 0-60 mph in a time of 1.9 seconds thanks to its three electric motors.

It will have a top speed of at least 250 mph and have a range of 620 miles per charge. With so much bang-for-your-buck it won’t come as a surprise to those in the auto industry if the Tesla Roadster finds a willing audience in both Europe and other strong EV markets like China.

Musk has said the Roadster isn’t a priority right now as his electric car company focuses on getting the Model 3 production car issues sorted.