Nike recently filed a patent of a new shoe design consisting of a miniature treadmill, fitted right inside the shoe.

By  Kashyap Vyas
May 12, 2018
United States Patent and Trademark Office

Fitness companies pour in a lot of money into research and development to come up with some fancy products for attracting the masses. Sometimes though, companies go beyond the extraordinary, only to end up with ideas that hardly make sense. Nike’s new shoe patent is one such example.

The shoe-making giant recently filed a patent of a new shoe design consisting of a miniature treadmill, fitted right inside the shoe. If you think that this might be another way you can shed some calories, this strange patent might demotivate you.

The “rotatable conveyor element” within the shoes is meant to ease the process of putting on your shoes. This mechanism will be powered by a motor and may consist of sensors to perform smart functions. Whether such shoes are needed by us or not is still subjective.

However, the design engineers at Nike feel that their proposed design will “assist the insertion of the foot into the footwear.” The information available from the patent is that the shoes will consist of “an upper configured to form a space between the upper and the insole," and the conveyer belt would be “configured to rotatably engage a body part of the wearer as the foot enters the space and draw the foot into the space.”

Even more, the conveyor mechanism according to Nike may feature an activation mechanism such as a switch to detect the presence of the foot. Upon activation, the switch will trigger the motor to rotate the conveyor belt, in order to assist the foot to easily enter the footwear.

The patent document also mentions that the design may include sensors to detect a change in orientation or movement with the footwear. This means, the motor can reverse the rotation of the conveyor belt to assist in withdrawing the foot out of the space.

The proposed shoes may also include a motor-powered zipper mechanism to provide an additional opening in the collar or throat of the footwear and ease the admission or withdrawal of the foot. Nike mentioned in its patent that this mechanism and its principles can be applied to any footwear range, using all or some components of the feature. 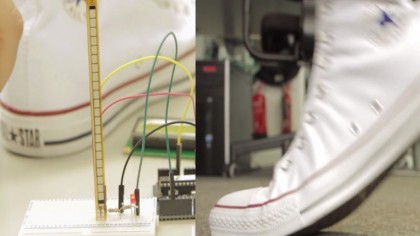 The concept may sound good and meaningful for people who have problems putting their shoes on and off due to lack of physical ability, but walking all day long on a conveyor belt that’s theorized to be locked by a passive braking mechanism sounds scary.

It will also be interesting to see how sustainable the proposed shoes will be, given the use of several mechanisms involving motion.

Whether Nike will utilize its patent to bring such shoes, in reality, is still unclear. The company did bring to life the concept of self-lacing shoes called HyperAdapt.

But, if the shoe-making giant really feels that their “foot insertion assistance” mechanism will make a difference to the society, we’ll be eager to know how it will come to fruition.

Learn How to Make a Miniature Pool with Working Flume Slides

Craft Your Own Miniature Dam With This Comprehensive Tutorial