Nissan and Renault are set to make a deal to make a single corporation after being in alliance since 1999.

Nissan and Renault are reportedly in merger talks and may start trading as a single stock. Details of the talks remain hidden but people close to the company said the idea is for the two companies to become a single corporation.

Currently, Renault owns 43 percent of Nissan while Japanese company Nissan owns 15 percent stake in the French carmaker. Together the two carmakers have produced more electric vehicles than any other manufacturer and the merger could be a way to secure more strength in a growing market.

Ghosn to stay on as head of the merged corporation

Carlos Ghosn is the current chairman of both companies and would stay on to lead the combined corporation if the deal is finalized The negotiations are focused on how shareholders would be compensated. Early reports suggest a situation where Nissan would give Renault shareholders stock in the new company.

Nissan shareholders would receive shares in the newly merged organization in exchange for their holdings. Both companies would keep their headquarters in Japan and France.

One big stumbling block in the negotiations may be from the French government. They own 15 percent of Renault and may not want to release the control it has over such a major car maker for the region.

The Japanese government would reportedly also have to approve the deal, with each government likely wanting the main HQ to remain inside their own territory. Neither car-maker has made any official comments on the rumored deal and the talks may continue for several more months.

Nissan keen to level the field

While both companies continue to say that the rumors of the negotiation are pure speculation, Reuters did report earlier this month that Nissan was in talks with the French government to buy their stake in Renault. To add to the complexity of the matter Mitsubishi Motors - which Nissan is a major stakeholder in - will join Renault and Nissan in a shared parts-purchasing organization.

Mitsubishi was already aligned with the other two car makers in a deal that stretches back to 1999. Nissan was founded in December 1933.

Nissan is currently the world's largest electric vehicle (EV) manufacturer, with global sales of more than 275,000 all-electric vehicles as of mid-December 2016. 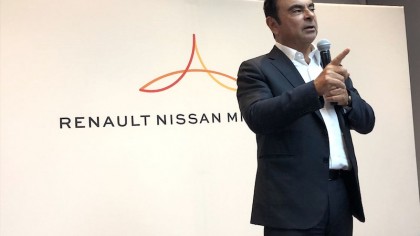 Renault was founded in 1989, their early work on mathematical curve modeling for car bodies played an important part in the history of computer graphics.

Renault has been pushing an electric vehicle agenda and electrified models will make up half of Renault’s production by 2022. Rumors of the proposed deal have sent Renault stock up 4.6 percent on March 29 while Nissan shares closed 0.5 percent lower in Tokyo.

Jet Skis Are Being Converted Into Motorcycles Because, Why Not?