Nissan will install new streetlights in the town of Namie, north of Tokyo, which will be powered by solar panels and used batteries from Nissan Leaf electric cars.

Japanese automaker Nissan will be using batteries from used electric Nissan Leaf cars together with a series of solar panels to power new streetlights in the town of Namie, which is in the Fukushima district, north of Tokyo.

The lights are angular and minimalist, they operate off-grid, and there is no need to run additional cables. Since the lights are not connected to the grid, even in the case of a natural disaster which could knock out the central power supply, the Nissan lights can keep on working.

The bases will contain used cells from Nissan Leaf hatchbacks. The solar panel will sit at the top, just above the LED light. The streetlight is 4.2-meter-tall and has more aggressive design compared to the regular street lamps.

These batteries will have completed their useful lifespan to power an automobile. The installation is named "Reborn Light" and is being regarded as a public works project as well as restorative modern art installation.

To be used in other areas as well

A model of the new outdoor lighting will be tested at Nissan's 4R Energy Corporation affiliate this weekend. There are plans for a full-scale implementation in the fiscal year of 2018. Namie, a town that is still recovering from the 2011 earthquake and tsunami, is not going to be the only area to receive these new lights.

"Nissan will light up places in the world that were never lit before," a company spokesperson said. The Japanese company has been researching ways to reuse electric vehicle batteries for years. 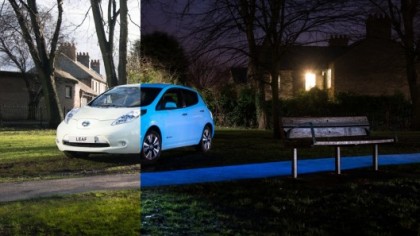 This has included combining multiple vehicles' packs to serve as power supplies for buildings and homes. These battery systems can be useful when the electrical grid is down. They can also store electricity purchased from the grid during lower-cost off-peak hours for later use.

This is similar to Tesla's Powerwall. Nissan's similar xStorage home unit has already been put on sale in other countries. Second-life electric vehicle batteries could also be used as remote power supplies in areas ravaged by natural disaster.

As Nissan has been making more and more electric vehicles, it has also been aware of that in the future there will be many decommissioned electric car batteries. As the auto industry makes the transition to electric power, battery repurposing and recycling will be one of the obstacles to be overcome.

"Even when batteries no longer serve to power cars, they can be reborn to keep serving humans."

Car makers such as Nissan have already been investigating second-life usage for batteries for years. However, industry experts think this market is still at its initial stages.

“We will turn the spread of the electric vehicle into an opportunity to spread batteries,” Nissan says in a video for the Reborn Light Project. “We believe it can change the world. Even when batteries no longer serve to power cars, they can be reborn to keep serving humans.”

Nissan believes if this model proves to be successful then it will be replicated on the larger scale. Other automakers who would like to do more with the electric car batteries can replicate Nissan's model.